Backstage with Dave Tompkins at ‘Off The Page’ 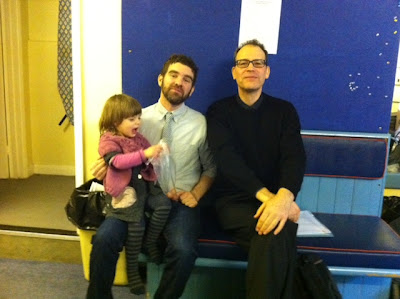 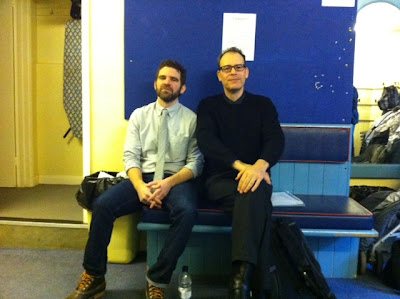 A much happier moment from last weekend was captured by Anne Hilde Neset backstage at the Playhouse Theatre on her i-Phone. While Dave Tompkins and I were in the dressing room, continuing our conversation from the night before, centring mostly around favourite moments from old horror movies, we were suddenly set upon by Mathilde Neset Young. Infant offspring of Rob Young and Anne Hilde Neset, Mathilde represents the ultra-new wave in music writing, combining the ability to discuss critical theory in both English and Norwegian with an overwhelming capacity for consuming lychees. All further discussion of Blood on Satan’s Claw, Frogs and Quatermass and the Pit ceased immediately: one has to respect youth in all its forms. About an hour later I was talking to a packed theatre about John Cage, and a couple hours after that Dave dominated the stage with his account of how his amazing book on the history of the Vocoder, How to Wreck A Nice Beach, came into being.

Pictured above from top to bottom: KH and DT with Mathilde; KH and DT without – Hello magazine should just give up now.
Posted by Ken Hollings at 15:08