Adaptations of Destroy All Monsters available on audiocassette from Tapeworm 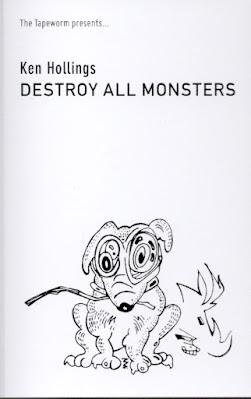 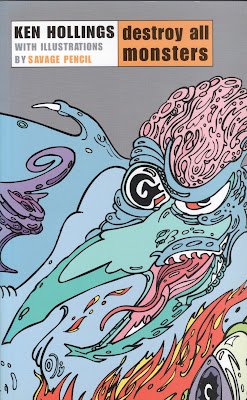 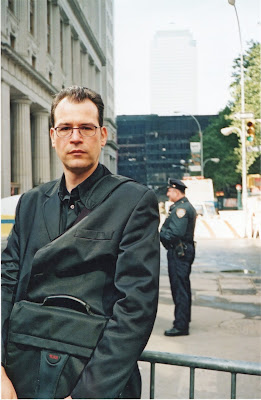 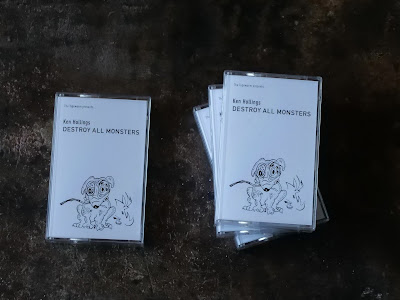 I am very pleased to announce that Tapeworm have just released on audiocassette some audio adaptations of scenes taken from derived from my first book Destroy All Monsters. These recordings, made in 2001 in the weeks before September 11, constitute a unique historical document. The order information for this Tapeworm release can be found here.

A multistranded postmodern epic, Destroy All Monsters offers a radical retelling of Desert Storm, America’s military operation targeting Iraq, using imagery derived from MTV videos, CNN news reports, Japanese kaiju movies and anime, Hong Kong action flicks and tales of alien abduction. The book’s entire narrative nervously unfolds in an unstable of world of terror monsters, wrecked cities and dangerously tall buildings: where an event like 9/11 is inevitable. The book was officially launched by Marion Boyars Publishers on September 13, but distribution in the United States was delayed when ports on the Eastern Seaboard were closed to shipping post 9/11, leaving copies of the book stranded in the Atlantic.  ‘Published the very week of the “attacks on America”,’ Toby Litt wrote at the time, ‘Destroy All Monsters is genuinely, spookily prescient…as a progress report on Planet Earth, it seems to have timeslipped onto the front pages.’ Lydia Lunch praised it as ‘a hallucinogenic spiral into future nightmare’, while The Scotsman called it ‘mind bending reading.’

In the summer of 2001, I was approached by sound designer and electronic music composer Simon James, who wanted to create an audio adaptation of scenes from the novel to share with subscribers to a spoken word channel launched by totallyradio.  The idea was to record me reading my own words and then embed them in a soundscape that evoked the fragmented complexity of the original text. I concentrated on a small handful of threads from the overall narrative, while Simon directed and engineered the final recording. This resulted in the two sequences of words, sounds and electronic tonalities contained on this audiocassette: an unsettling portrait of people about to be overtaken by events.

In October 2001, having just got married in London, Rachel and I went to New York for our honeymoon, just as we had originally planned. We spent an unforgettable week in a city struggling to recover from the seismic changes that had just taken place while a sudden wave of anthrax attacks on government and media offices filled the news cycles. Rachel took a photograph of me at Ground Zero, where crowds of onlookers continued to gather, and the air still smelled of burning.

Simon James and I remained friends over the years, working together whenever we can. Simon is an outstanding producer, musician and sound designer, whose work combines electronic sources with field recording techniques and sound treatments, using sound to transport the listener to fantastical audio worlds. His latest release, Electro Smog, collects electromagnetic field recordings from Shenzhen's electronic markets, recorded while he was in China at the invitation of Musicity and the British Council.

These Destroy All Monsters audio adaptations marked the first occasion Simon and I worked together – subsequently we collaborated on the 12-part series Welcome to Mars for Resonance 104.4 FM and Connecting, an audio portrait of the original ‘phone phreaks’, for BBC Radio 3. We teamed up again earlier this year to make Fast Forward, an award-winning six-part documentary series for Kasperksy Lab.

My thanks as always to Savage Pencil for doing the cover art for both the book and audiocassette incarnations of Destroy All Monsters as shown above, to Philip Marshall at Tapeworm, Simon James at the controls and, of course to Rachel for taking pictures three and four.

Posted by Ken Hollings at 11:59 No comments: