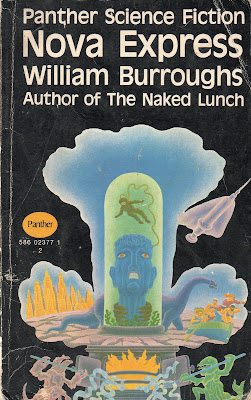 ‘The section called “This Horrible Case” was written in collaboration with Mr. Ian Sommerville, a mathematician – Mr. Sommerville also contributed to the technical notes in the section called “Chinese Laundry” – An extention of Brion Gysin’s cut-up method which I call the fold-in method has been used in this book which is consequently a composite of many authors living and dead.’

The Ticket That Exploded – William Burroughs 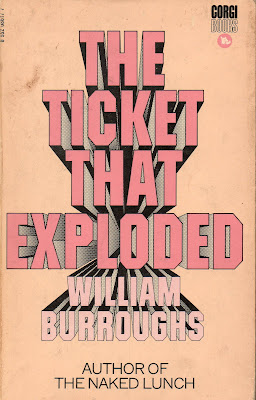 Originally published in Great Britain
by Calder and Boyars Ltd

The sections entitled in a strange bed and the black fruit were written in collaboration with Mr Michael Portman of London. Mr Ian Sommerville of London pointed out the use and significance of spliced tape and all other tape recorder experiments suggested in this book. The film experiments suggested I owe to Mr Anthony Balch of Balch Films London. The closing message is by Brion Gysin.

Cover design and typography by person or persons unknown.
Posted by Ken Hollings at 16:21 No comments: 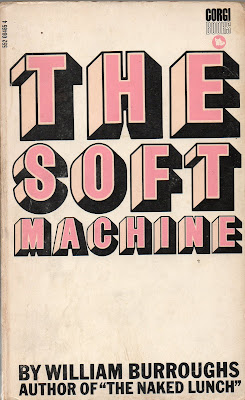 ‘The first version of The Soft Machine was published in Paris in 1961 and this final definitive edition has been considerably revised by the author.’

Cover design and typography by person or persons unknown.
Posted by Ken Hollings at 11:44 No comments:

Catching up with Dario Argento’s ‘Profondo Rosso’ in Turin

I have been so busily engaged in writing up my recent experiences with My Cat is An Alien in Turin for a forthcoming issue of The Wire that I have not had many opportunities to post some of the more amazing pictures documenting my stay with them. One of the places that Maurizio, Roberto and Ramona were particularly keen to show me was the Villa Scott, tucked away in the Torino Hills, on the other side of the Po from the main city centre. Fans of Dario Argento’s 1975 masterpiece Profondo Rosso will have no trouble recognizing in these gentle art-nouveau lines the setting for one of the defining incidents from this giallo tour de force. Actual locations for movie scenes have their own special architectural presence; they are haunted in a way that only those who have grown up with cinema can possibly understand and must always exist as a link between two worlds. In this case, the gates to the villa were firmly locked, and the entire place seemed to belong only to the late-afternoon shadows. However, my attempts to reach through the railings to photograph the main entrance provoked a growl from somewhere deep in the undergrowth, suggesting that, at the very least, a guard dog was lying in wait for any sign of trespass – and that’s at the very least. Needless to say I pulled my arms back in quite quickly

Pictured above: three views of Villa Scott by KH and three by Roberto Opalio – the last one in the series shows KH and Ramona Ponzini braving the guard dog outside the main gate in the name of cinema, architecture and extreme bloodshed.
Posted by Ken Hollings at 15:37 No comments:

Catching Up With Nietzsche In Turin


‘I arrived on the afternoon of the twenty-first in Turin, my proved place, my Residenz from now on. I took again the same accommodation I had occupied in the spring, via Carlo Alberto 6,III, opposite the mighty palazzo Carignano, in which Vittorio Emanuele was born, with a view of the piazza Carlo Alberto and beyond that the hills.’

On the morning of January 3, 1889 Friedrich Nietzsche left his lodgings on the piazza Carlo Alberto. Accounts vary slightly on what precisely happened next, but within a few paces he encountered a cab driver beating his horse on or near the piazza Carignano, overlooked by the imposing Baroque facade of the palazzo Carignano. Nietzsche flung his arms around the horse’s neck to protect it, then collapsed to the ground unconscious. He was immediately carried back to his room on the piazza Carlo Alberto, returning along the little side street linking the two squares, again under the stern walls of the palazzo Carignano. When he finally regained consciousness he was no longer sane. Up until his death on August 25, 1900, he was never to be in his right mind again.

I was very moved to be conducted by Roberto and Maurizio Opalio and Ramona Pozzini to visit the spot where the tragic events of January 3 1889 took place. The distances involved seem pitifully small compared with the enormity of the mental breakdown suffered by Nietzsche that day. Even so, Roberto was kind enough to point out to me the window of Nietzsche’s room looking out onto the piazza Carlo Alberto, where I am happy to report that you can still catch a glimpse of the hills beyond.

Pictured above: the palazzo Carignano, bearing the name of Vittorio Emanuele II; the cobbled piazza Carignano and the side street leading to the piazza Carlo Alberto at the top left of the photograph; the side walls of the palazzo Carignano, Nietzsche’s last accommodation in Turin – his room is the one with the open window and the orange curtain, located on the second floor, second in from the left; looking back towards the side street leading to the piazza Carignano. As an unintended side-effect, the lurching zigzag motif suggested in the sequence of pictures above gives a sense of the collapse and distress associated with this part of Turin.
Posted by Ken Hollings at 10:36 No comments: