Tiny Orchestra – That’s The Way It Is

This footage of the Tiny Orchestra’s January 11 performance, rather charmingly shot in portrait by Marie Artaker, has recently been posted on Vimeo. More videos should be shot and displayed in this format. Marie broke her leg very recently – we hope she feels better soon and wish her a full and speedy recovery.
Posted by Ken Hollings at 06:36 No comments:

The Tiny Orchestra: First And Only Performance 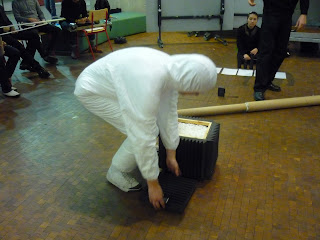 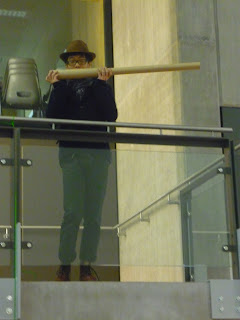 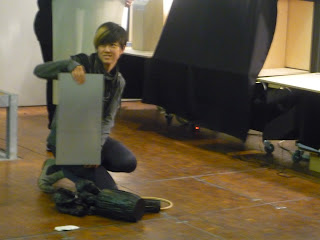 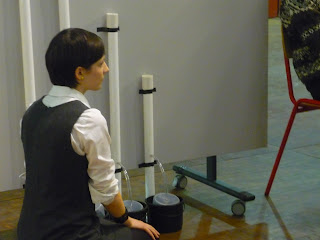 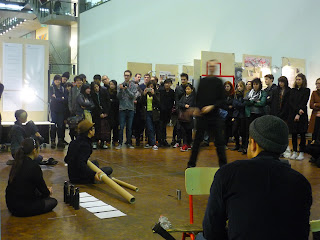 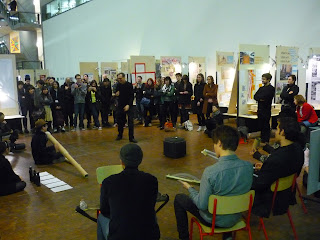 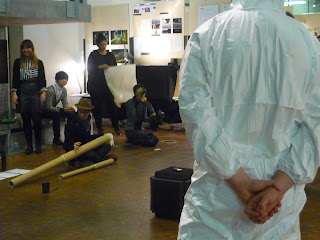 At 6.00 pm on the early evening of January 11 2012, an enthusiastic audience had gathered at the end of ‘The Street’ at Central St Martin’s new premises at King’s Cross in order to hear The Tiny Orchestra perform for the first – and last – time. In a short but meditative piece, those with ears to hear and eyes to see with were charmed by artificial dinosaur larynxes made from cardboard and rubber gloves, a soundproofed box containing a silent recording device, a wooden box containing nothing at all, alien metals and resonating junk of various kinds, a ‘latex wind’, an aerosol xylophone, a plastic ‘bubblophone’ and something called a ‘mu-o’, which appeared to be fashioned from a black plastic bin bag. Not since the divine abyss at Bayreuth cleared its throat for the first time have there been sounds like these. As we shall probably never experience their like again, any documentation of the event will be gratefully received and displayed on this blog. The photographs reproduced above come courtesy of Elsa Westreicher, to whom sincere thanks are due.
Posted by Ken Hollings at 13:38 No comments:

The Tiny Orchestra: Design and Preparation 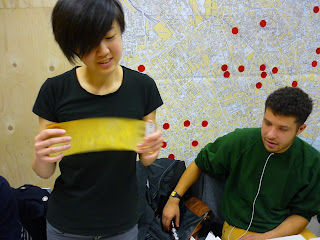 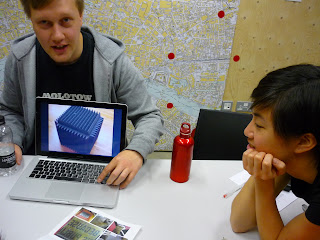 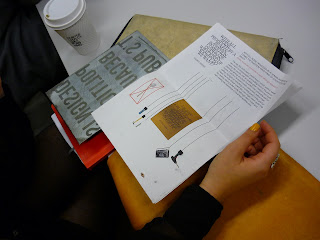 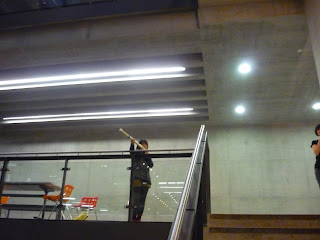 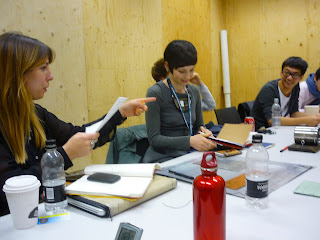 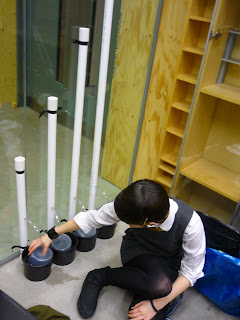 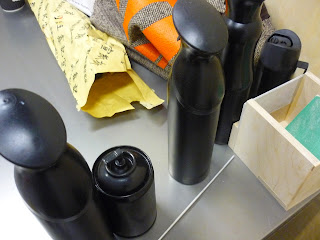 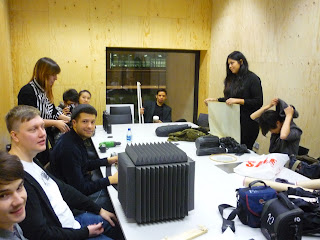 Over the past two months I have been running a series of studio tutorials with BA Graphic Design students in their final year at Central St Martins. The aim of the ‘Tiny Orchestra’ brief was to create an ensemble of sound instruments and noise-makers that could perform together in a small composition which would reveal the full extent of each instrument’s range – both in terms of tone, timbre and volume. At what stage does a device become a musical instrument? This is a question for interactive designers. A piano, after all, is just an elaborate machine made up of wires and hammers and keys that allows someone to ‘make’ music. The idea was to create an instrument from everyday objects that would be capable of creating interesting noises. Each student had to be able to explain how they arrived at the solution not just in technical terms but also in the design philosophy behind it – for example, does an instrument necessarily have to be loud? Or tuneful? Might it not also interact with other media: colours, lights, words, movements? And if so, how? I was very impressed by the inventiveness and enthusiasm which the students brought to the Tiny Orchestra – some of their solutions were quite ingenious. The pictures taken above give some flavour of the some of the interim sessions during which the students prepared themselves for a live public performance, which will be documented in a supplementary post. The photographs offer silent testimony to an exuberant and audible experience – which therefore requires no further comment from me.
Posted by Ken Hollings at 12:51 No comments:


Ken Hollings on the legacy of John Cage from Sound and Music on Vimeo.

This seems like as good a way as any to start 2012: Sound and Music have finally posted the film made of my lecture ‘The Realization That We Possess Nothing: Some Thoughts on Cage – Post Cage’ on Vimeo. This talk was delivered almost a year ago at the Playhouse Theatre in Whitstable the morning after a man threw himself out of the window next to mine at the hotel in which I was staying – those who wish to refresh their memories of that grim and strange event so click here. Otherwise sit back and enjoy this rather fine video, which benefits from a two-camera set up in the theatre and the relatively long time it has spent in post-production - good to see that none of it was wasted over getting my name spelled correctly on the main title. My thanks to everyone involved.

See also:
‘Cage Post Cage’ Lecture at Off the Page Festival
Backstage with Dave Tomkins at ‘Off the Page’
Posted by Ken Hollings at 17:30 No comments: