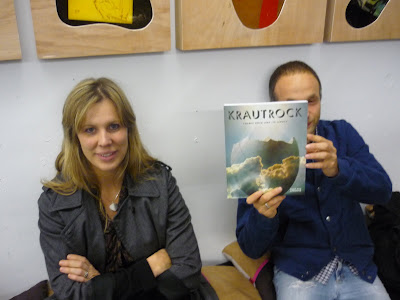 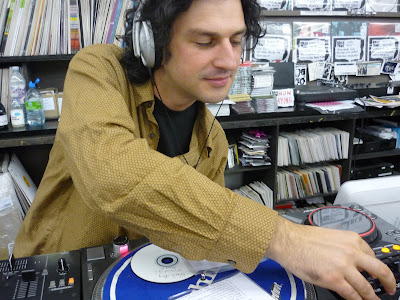 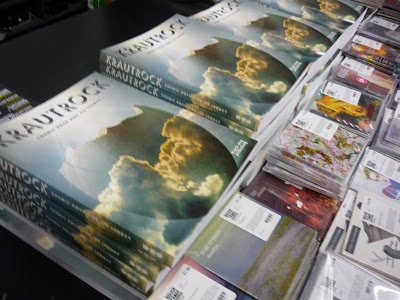 Black Dog Press launched Krautrock: Cosmic Rock and its Legacy at Rough Trade East on Thursday October 30. Greetings and thanks to everyone who showed up and made it happen.

Pictured above from top to bottom: Anne Hilde Neset from The Wire with Krautrock editor Nikolaos Kostopoulos get their face on; Mark Pilkington of Strange Attractor storms the house with a deeply Kosmische DJ set; copies of Krautrock on display at the main counter, doing what good books do best.
Posted by Ken Hollings at 09:42 No comments: 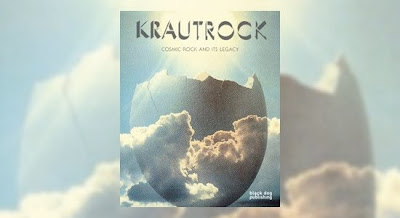 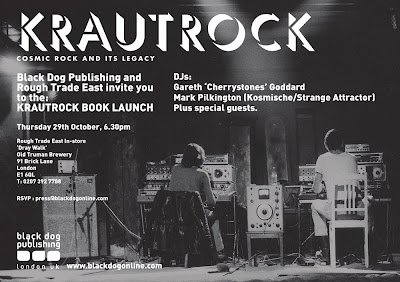 Krautrock: Cosmic Rock and its Legacy, the latest volume from Black Dog Press, gets a launch at Rough Trade East this Thursday. The book, edited by Nikolaos Kostopoulos, features contributions from Michel Faber and Erik Davis, plus a new essay of mine, ‘Background Radiation: The West German Republic Tunes Into the Cosmos’, which looks into the cultural roots of the genre. With BBC4 recently screening a documentary on the history of Kraut Rock and Kraftwerk bringing out repackaged and digitally re-mastered editions of their existing back catalogue (what, no Ralf and Florian, guys?), this is a good time to party like it’s 1969. Instant history for a last-minute future – it’s yours for the asking.

Krautrock launches on Thursday October 29 at Rough Trade East – see the calendar opposite for more details.

The late 1960s in West Germany was a period of profound breakthroughs, upheavals and reversals. Communes were spreading, protests organised throughout the entire country, the desire to begin everything anew permeating the young. Out of this climate, a music scene exploded that would forever change the face of western rock; at times anarchic, at others mystical, magickal, or utopian, it pushed rock beyond any known limits.Never a genre or a movement per se, Krautrock encompassed a very wild and diverse range of sounds, attitudes, and past musics, from free jazz to Karlheinz Stockhausen, from dada to Fluxus, from German Romanticism to the Mothers of Invention. The musicians operated outside any known categories, breaking new ground and turning their backs to both their country's past and the conventions of Anglo-American rock.

Their vision fired the imaginations of generations of musicians after them: Cabaret Voltaire, Brian Eno, Nurse with Wound, PiL, DAF, Einstürzende Neubauten, to only name a few, have all acknowledged their debt to Krautrock's uncompromising, outsider ethics and far-out sounds. From the relentless drum beating of Amon Düül I, to the eastern tinged mysticism of Popol Vuh and the sonic assaults of Conrad Schnitzler, Krautrock: Cosmic Rock and Its Legacy traces the history of this phenomenon. Illu strated with concert photos, posters, record cover art and other rare visual material and testimonials from Gavin Russom (Delia and Gavin/Black Meteoric Star), Plastic Crimewave, Circle, Stephen Thrower (Coil/Cyclobe), and Ann Shenton (Add N to (X)) this is an essential compendium to a music whose spirit and ideas still vibrate through contemporary culture today. 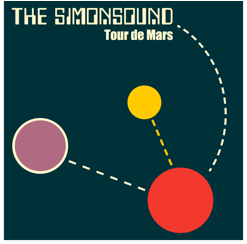 News has come in from Simon James, who created the amazing electronic scores and effects for the Welcome to Mars podcast series, that the Simonsound are set to follow their first 7” ‘It’s Just Begun’ with an FX-laden deep space reworking of Kraftwerk’s ‘Tour de France’ (heavy on the drums). ‘Tour de Mars' is a big and bold dance track from the future we never had. This is the real Big Ring: the race we were destined for. The flipside is ‘Baker’s Dozen’: inspired by the work of BBC Radiophonic Workshop composer John Baker, famous for taking everyday sounds and using them to create music, warping the minds of whole generations as a consequence.

Before establishing themselves as the Simonsound, Simon James and Matt Ford have been working together on various projects over the years. You may have heard their work together before on Matt’s albums under his guise as DJ Format, on which Simon assisted with production and mixed all vocals. In this day of limited vinyl sales the Simonsound defied the odds to sell the 1000 self-pressed copies of their debut 7” ‘It’s Just Begun’, which has been played and praised around the world by DJs like Cut Chemist, DJ Muro, Edan and Florian Keller. A debut album, Reverse Engineering, teeters confidently on the edge of release.

The single ‘Tour de Mars’ is available from the 2nd November 2009 on 7" vinyl and as a digital download from Bandcamp
Posted by Ken Hollings at 08:13 No comments: 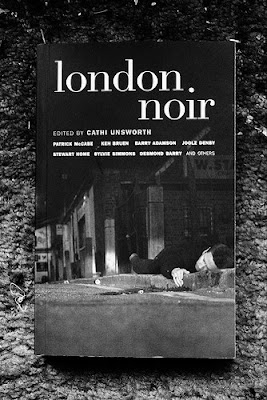 London Noir continues to cast a long shadow. Edited by Cathi Unsworth and subtitled ‘Capital Crime Fiction’ it is a collection of noir narratives, each set in a different location in London, our beloved mother of excesses. I was very pleased to have contributed the short story ‘Betamax’, which takes place amidst the steel and glass towers of Canary Wharf. Sometimes, however, the best view of a city is from outside, so I was very pleased to hear from Cathi that there is now going to be a French edition of the anthology, due next year from Asphalte Editions. Young and inclined towards adventure, Asphalte already have a swinging blog, Asphalte Cafe, which is definitely worth a visit.

A recent email from Johnny Temple at Akashic Books in New York, London Noir’s original publishers, reminds me that an Italian edition is also available from Alet and there will soon be a Turkish edition from Everest. More news on these as and when they come up. In the meantime Cathi’s new novel Bad Penny Blues is poised for publication, ready to give you a glimpse of London in the Swinging Sixties you won’t forget in a hurry. I salute, as always, my suave sister in crime.

Pictured above: a copy of the Akashic edition of London Noir laid out on the cold, cold asphalt, photographed in suitably noir fashion by the inimitable Simon Crubellier.
Posted by Ken Hollings at 11:08 No comments: 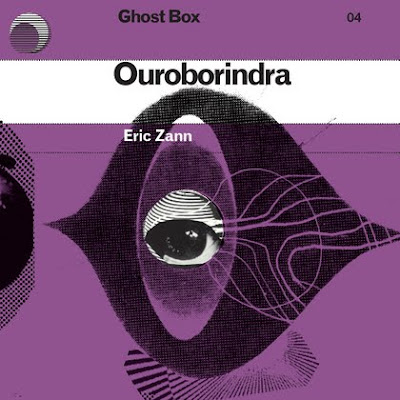 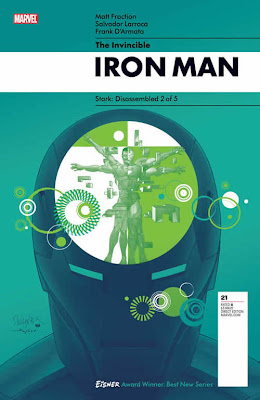 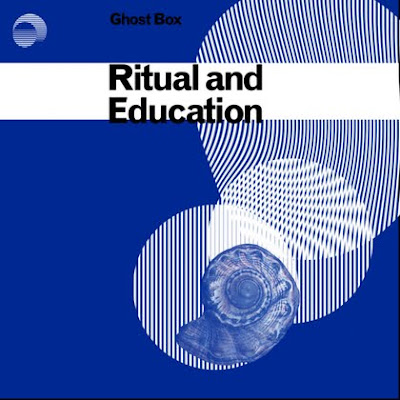 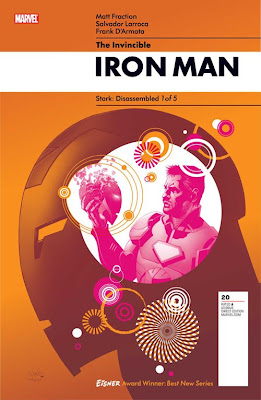 ‘And there are moments when you half expect to catch a glimpse of yourself on a crowded street, talking intimately with strangers you don’t recognize – or to find that someone who looks extraordinarily similar to you has taken your place, and neither your family nor your friends seem to have noticed the difference. We live much closer to these different parallel worlds than you could possibly imagine: coincidences and other strange simultaneous happenings are just one clear manifestation of their existence. Who knows what might emerge from them next to trouble our imaginations?’ – Stanley De Brath, M. Inst. C.E.

Pictured above: covers for the latest story in the Marvel Comics series The Invincible Iron Man, ‘Stark: Disassembled’; Julian House’s cover art for Ghost Box album releases Ritual and Education and Ouroborindra.
Posted by Ken Hollings at 09:16 No comments: 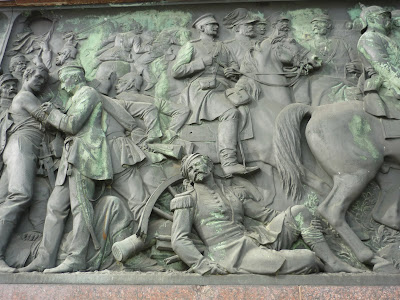 The catalogue accompanying the exhibition El Dorado: On the Promise of Human Rights, which recently opened at the Kunsthalle Nürnberg, includes a new essay by BBM’s Olaf Arndt in which he extends the metaphor of the labyrinth into areas of military training. The essay, reproduced in both English and German versions, is a boldly extended examination of primal images as they apply to notions of art and security in times of crisis, the original Labyrinth being so secure that it nearly trapped its own creator within it. In the sequence below he builds upon some of the remarks I made during my lecture at the Akademie der Kunste earlier this year as part of the Embedded Art show:

Network. At this point Ken Hollings suggest an astonishing shortcut to the present: from the labyrinth to the Net, from the ancient tomb and symbolic prison directly to the utilitarian planned cities of the industrial era, from mythology directly to the political and military history of the 20th and 21st centuries.

A warning should be given here not only to the myth researchers but also to the academic labyrinth experts: for this tiger’s leap through history, Hollings presupposes the admissibility of a largely metaphorical interpretation of the concept of the labyrinth.

I would like to adopt that reading, as this text is not about repeating facts established by art history. Other authors, like Hermann Kern, have already provided comprehensive and unsurpassed descriptions of the labyrinth and all its socio-historical aspects. Moreover, this is not the place for an incontrovertible interpretation of the myth. In many of his books Robert Ranke-Graves showed how complex the sources are. So the following questions put to the myth are not to be understood as contributing to a clarification of philological lacunae, but serve to examine the relevance of such myth-stories today; they are approaches to determining the presence of a primal image.

A more detailed study establishing the connections between the labyrinth and the digital regime of the 21st century will form a part of my book The Bright Labyrinth: Death, Sex and Design in the Digital Regime, which is currently in preparation.

Pictured above: figures at the base of the Siegessäule, the Berlin Victory Column, March 2009
Posted by Ken Hollings at 08:55 No comments:

With Mark Boswell at the Horse Hospital 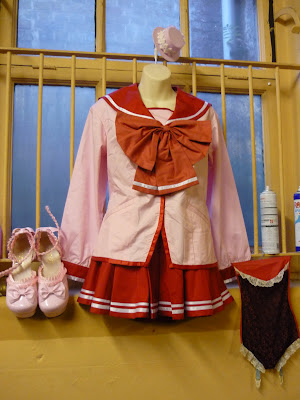 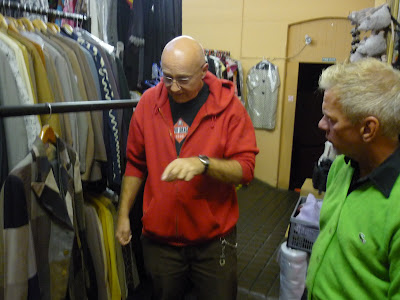 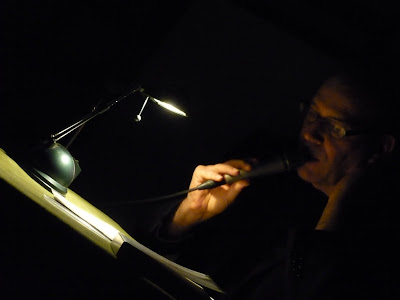 Combining Mark Boswell’s feature film The Subversion Agency with a reading from Welcome To Mars made for a lively evening at the Horse Hospital earlier this week. However, so far as Mark and I were concerned, most of the real fun came from being invited to look around the Contemporary Wardrobe Collection by Roger Burton before the show. Our thanks to everyone at the Horse Hospital for their generous welcome and kind hospitality. Mark will be returning to the UK early in 2010 to continue work on his new film Nova Conspiracy – I saw the trailer at the Cambridge Film Festival and it looks like another twisted tale of rogue agents, megalomaniacal plotting and geopolitical intrigue in the Epcot Centre. Walk – don’t run – to the nearest exit.