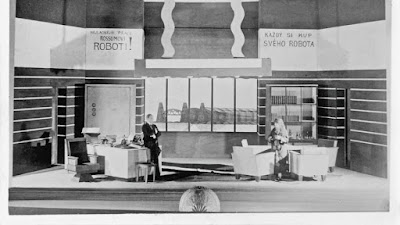 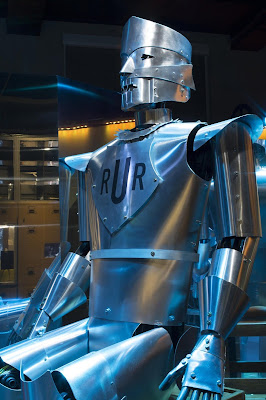 On 25 January 1921, at the National Theatre in Prague, the first performance of Rossum’s Universal Robots, or RUR, by the Bohemian playwright Carel Capek took place. In terms of pure theatre, his ‘comedy of science’, as he liked to call it, is fairly unremarkable – it had none of Meyerhold’s biomechanics, the abstract dynamism of Futurist sintesi or the geometric reduction of human form or motion found in Bauhaus theatre and theatre. But it did give the world a new word: ‘robot’.

Ever since I first wrote about RUR in my essay ‘Robot Power, Robot Pride’ for Strange Attractor Journal Two and in my book The Bright Labyrinth, I have wanted to do something more detailed on Capek’s play. The Samuel French edition of RUR published in 1923 described RUR as a ‘fantastic melodrama’ but it would be a struggle to call it science fiction. Flash Gordon and Buck Rogers are still a long way in the future. However, its impact upon the cultural imagination of the time was so deep that the word ‘robot’ continues to have a deep resonance today.

The Robots Are Us is my attempt to explore why a word that barely existed in Czech at the time when Capek wrote RUR managed to capture the fears and desires of its times the way it did.  Capek’s robots were made of flesh and blood in giant factories – robots today are mostly silicone, plastic and metal alloys – some only exist as strings of code. Our collective anxieties over a possible robot rebellion remain, however. I was lucky to have people like Caroline Edwards, Roger Luckhurst, Danielle Picard and Dustin Abnet to discuss the play with me. I was even more fortunate to have Mark Burman as my producer. He and I have worked together many times before, most notably on last year’s essay series celebrating 2019 as The Year of Blade Runner .

The programme goes out on Sunday at 18.45 GMT on BBC Radio 3 but will remain online afterwards. You can find the details and a link here.

Pictured above: an early Czech production of RUR and Eric, Britain’s homemade answer to RUR as reconstructed for the Science Museum’s Robots show in 2017

Posted by Ken Hollings at 12:07 No comments: