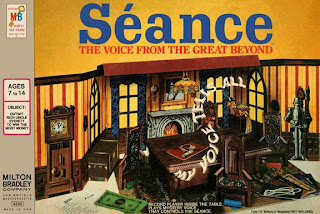 ‘Elvis speaks from Beyond the Grave! Here is the evidence gathered by Professor Hans Holzer from his six-month investigation to prove that the spirit of Elvis Presley survives in a world beyond’ From the jacket copy to Elvis Presley Speaks: The Astonishing Evidence of Spiritual Contact with Elvis from Beyond the Grave, published as a New English Library paperback in 1980, but first available from Manor Books in 1978.

For the remainder of the séance, Elvis spoke about the other side, and when asked, by Hans Holzer, if his mother was with him all the time he replied, ‘no.’ Elvis said he tried to contact his father in dreams for the purpose of telling him to: ‘Stop the counterfeit Elvis Presleys’ and to ‘keep an eye on his daughter.’ Elvis also said that he had been contacted by another psychic named ‘Wright.’ In life, Elvis was acquainted with Indiana psychic, Lou Wright, whom he met through Charlie Hodge.This ends Part I. Next, messages on Colonel Parker, Charlie Hodge, and others...

To read transcripts of the 1978 Elvis Presley séances, click here.

‘Record player inside the table plays mystery voice that controls the séance’ - text on Séance game box top reproduced above (courtesy of Grandmacarrs.com, which features a great selection of other supernatural and glow-in-the-dark board games from the 1970s)
Posted by Ken Hollings at 10:12 No comments:

Cathi Unsworth Knows Where You Live

The latest hard copy from crime novelist and Bohemian London’s most favoured femme fatale Cathi Unsworth is that a free music download has just been posted on her new website.

‘My dear pal Pete Woodhead - the maestro behind the Shaun of the Dead soundtrack and sometime Son of Silence – has crafted me a murderous soundtrack,’ she writes. ‘We hope to make this the first in a series of spooky sonic sojourns.’ I hope so too.

Also of interest on Cathi’s website is a YouTube clip of the short feature she made for BBC London News to promote the crime anthology London Noir. The footage shows her reading from her own story ‘Trouble Is A Lonesome Town’ in its Kings Cross location, plus part of the opening to my contribution ‘Betamax’, set against the glass and steel towers of Canary Wharf.

The piece was first broadcast on August 14, 2006, having been postponed from its original TX due to the airport terror alerts. Fellow contributor Martyn Waites and I had been invited to do a live studio segment on the book as part of the feature, but this was cancelled to make room for coverage of the security alert – as if two more talking heads discussing violent death was going to make any difference at the time. Still it’s wonderful to have the pleasure to see and hear Cathi reading so beautifully from ‘Betamax’ – and also salutary to be reminded once again that the August 06 security measures are still in place. Are you carrying any liquids of any kind? End transmission.
Posted by Ken Hollings at 09:23 No comments:

The United Nations is Decadent and Depraved 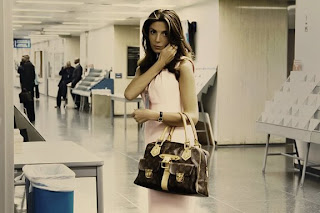 My good friend Mark Boswell has just sent me details of a really fascinating show he has coming up at the Jason Rulnick Gallery in Manhattan this week. It’s a collaboration with Russian-born photographer Anton Koslov Mayr and is running from May 21 to June 17. Here’s a copy of the press release, which you can also download as a PDF by clicking here:

‘The United Nations is Decadent and Depraved is a collaborative project between the American filmmaker Mark Boswell and the Russian photographer Anton Koslov Mayr featuring photographs, artifacts, and a 20 minute film installation inspired by Hunter S. Thompson’s short story; “The Kentucky Derby is Decadent and Depraved.” The project was filmed during the 2008 Session of The United Nations in New York.

‘Through creative measures, Boswell and Koslov Mayr obtained U.N. credentials, gaining access to General Assembly speeches, conferences, press room activities, and the building at large. The project attempts to draw a critical portrait of fleeting relevance for the only international body of law in the world.

‘Anton Koslov Mayr is a Russian-born photographer whose works has been exhibited internationally through museums, festivals, and galleries including Art Moscow 2005, Paris Photo 2006, and The Museum of Modern Art Medellin, Columbia. Koslov Mayr studied film and philosophy at NYU and Harvard. He lives and works in Paris.’

For more images every bit as fabulous as the reproduced one at the top of this post, please click here.

Just posted on YouTube is a short movie that Howard Walmsley filmed in Beijing with calligraphy students from a local art college. The storyboard was based on an old text I wrote for Biting Tongues which was never recorded but featured in some of our live performances. It was originally written for three voices but has a certain fragmented intensity when delivered by only one. Howard had always thought the individual lines of the text could be read like panels from a comic book, and so he storyboarded a set of scenes that have expanded on this effect.

To me, the shift from the comic-book format, which had a huge influence on my development as a writer, to that of the music video makes total sense – the cropping and chopping of texts and images in the former is reflected in the tightly edited rhythms of the latter. Each image hits you and goes, only to be replaced by the next.

The soundtrack was assembled last summer, and a mix of it has been on the Biting Tongues MySpace page for a while: produced by Graham Massey, it features the original line-up and is the first studio recording we have done together in a very long time. Reading aloud a text written so many years before is a little like receiving a message from a previous incarnation. You suddenly become another person.

‘And you ask: who is speaking?’

The lines delivered by the girl in the video aren’t on the original track, I'm sorry to say, but I hope she will be included on any future mixes. My thanks to her and to all the other students who took part in the filming – I don’t think any words of mine have ever been interpreted with such enthusiasm or concentration.
Posted by Ken Hollings at 10:37 No comments:

Return To The Labyrinth 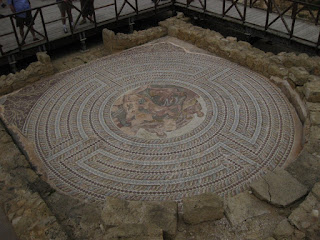 This is inform you that, due to changes in the timetable for the summer term, I will not be giving any more of my Wednesday afternoon lectures in RLS1100. I shall, however, be continuing my researches deep within the Labyrinth, so please feel free to contact me directly via email. I will soon be setting up a Critical Context wiki for all students to contribute further insights and information related to themes covered in the series – plus a few subjects we never got around to – so watch out for more details showing up in your inboxes very soon.

In the meantime the above image comes courtesy of Olaf Ardnt and Janneke Schönenbach of BBM. It was taken on a recent visit to Cyprus and are in response to a long conversation I had with them in Berlin about the relationship between labyrinths, simulation and behaviourism with particular reference to training and discipline. Expect more on this too in the near future.
Posted by Ken Hollings at 09:06 No comments:

Catching Up With The Mercado Central 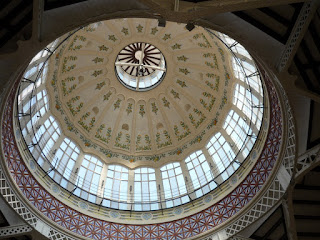 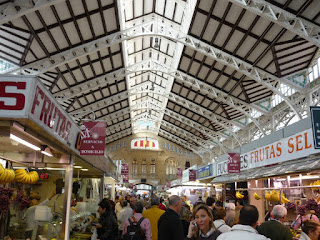 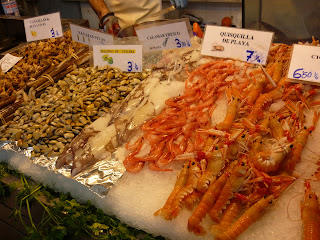 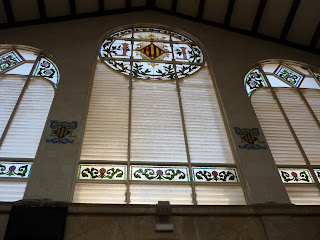 Following on from my previous post on Heathrow’s Terminal 5, here is another arrangement of glass and steel, courtesy this time of the Mercado Central, a massive indoor market in the centre of Valencia. A classic piece of art nouveau design from the very end of nineteenth century, its glass dome forms a prominent part of the city’s red skyline at night. Wandering through its crowded concourses, stacked with every kind of foodstuff known to human taste, it felt a little like passing through a vast transparent oesophageous. Its piled up and edible contents, together with the cruciform layout and massive dome, also seemed more ecclesiastical than Valencia’s main cathedral, where the vessel alleged to have been used by Christ used at the Last Supper resides.

This combination reminded me of Walter Benjamin’s comments in Section S: ‘Painting Jugendstil, Novelty’ from his Arcades Project:

‘The three “motifs” in which Jugentstil finds expression: the hieratic motif, the motif of perversion, the motif of emancipation.’

In comparison with the heroically vaulted glass of the Mercado Central, the highest windows in Valencia Cathedral are so old and so discoloured it’s as if they were reverting back to sand. Each pane is uniquely different from the others – something only time and change can do. Me, I just go where my camera takes me.

Pictured above: windows and domes, mobile phones and crustaceans mingle in the Mercado Central just before Palm Sunday 2009.
Posted by Ken Hollings at 10:21 No comments: