Catching Up With The Balcony Below Room 16 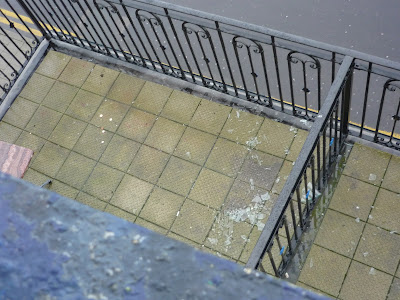 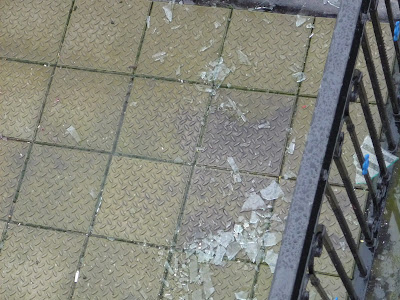 It is hard to write a site report on ‘Off the Page’, which took place at Whistable, a small picturesque town on the Kent coast, over the weekend without mentioning one incident that was not related in any way to the festival but which has ended up overshadowing any recollection I may now have of it. And if that opening sentence sounds a little too much like the introduction to an M R James tale in which a guest at a hotel is troubled during the night by strange sounds coming from the room next door and then finds himself the next morning alone at breakfast, his nerves badly jangled, contemplating what actually happened, then I apologise; but that’s pretty much how it was. This series of posts has always been about the architecture of buildings I have recently visited: in it I try to treat them as if they were films or books or magazines that I have only just managed to catch up on. This post seems a little more immediate than that, however.

At around midnight of the first day of the festival, I left Jonny Trunk, Steve Beresford and Dave Tompkins chatting in the bar and went up to my room: I would have loved to stay in their company but was scheduled to give my talk on John Cage at 10.00 am the following morning so wanted to be rested for an early start. I cannot have been asleep for more than forty minutes before I heard a banging and scratching on my door. The following are the notes I wrote up immediately after what happened:

The guy woke me up about 1.00 am trying to force his way into my room - he’d mistaken the number – I was in 18 – turned out he was in 16 - like an idiot I actually opened the door and saw him off. He then started yelling at a woman who was already in his room: it was evident he was really drunk – he quietened down quickly though, kept up a steady stream of talk, rambling and very aggressive but as if his engine was about to run down. Then just before 2.00 he started getting very loud again and abusive towards the woman – by then she was crying and screaming and pleading. I couldn’t stand to hear that and do nothing so called down to the night manager – told him that things in the room next door were getting nasty. He came up, told the couple in room 16 that he’d called the police but I think it was a bluff at that stage – I heard him enter the room - the drunken man claimed he’d ‘just been asleep’ - things became extremely violent and heated after that - night manger badly beaten, out on the landing, making the most inhuman cries – sounded like the woman locked herself in bathroom, then came out again – the man throwing stuff around the room and swearing loudly – heavy violent banging against the wall – then a lot of very loud yelling and a window suddenly shattering - I thought it sounded as if he had thrown himself through it in a shower of broken glass – but later heard that he was pushed. I dialled emergency services on my mobile - it was about 2.20 am by then - said they should bring an ambulance and police - she said there was already a call logged in, but could I give them the correct address for the hotel, which I was able to do because I had the festival information pack on the bed next to me – even so, no one arrived before 3.00 - all that time the drunk is screaming ‘Ella! Ella! My leg’s hanging off I’m bleeding to death - call a fucking ambulance - anything’ – over and over again for a half hour – no choice but to sit in silence and listen, fingernails through the palms of my hands - then there were the voices of the ambulance crew on the balcony trying to lower him down to the street – they had to cut his trousers off his injured leg in order to reposition it – more screams and groans – the sound of broken glass being swept up – meanwhile a policewoman took Ella away – then a police patrol stopped by the room around 4.00 to check it over - and maybe I slept then for a little while or maybe I didn’t. I’m not sure.

I finally left my room around 8.00 am – saw the blood streaked down the door to room 16 and trailed across the landing carpet. Suddenly realized I had actually seen nothing but heard it all unfolding through the thin hotel walls. Went down to reception and asked after the night manager – the woman at reception had only arrived that morning so had no real idea of what had happened – she said he was badly beaten and still in hospital and that she had known him well and was very upset to hear what had happened to him. I mentioned the blood on the door and she said that it was still a crime scene - the forensic investigation van had just arrived - ash blonde woman with camera and sample cases. ‘Watch it or I’ll push you through the window,’ I heard one hotel staff member say to another. Saw Mark Fisher and his lovely wife Zoe in the corridor with their new baby ‘What? I didn’t hear anything,’ he said when I told him a little about what had happened. They were booked into a room on the other side of the building. ‘We were just worried about the baby crying and keeping everyone awake.’

Steve Beresford and Jonny Trunk were wandering around outside the hotel. What the hell happened? They’d both heard parts of the night’s events from their respective rooms. Most of the ‘Off the Page’ artists had been put up in the same hotel, so an account of the incident was slowly beginning to take shape. Green Gartside had seen the night manager after the assault, sitting downstairs, his face badly swollen. David Toop had been awoken by the breaking glass and the drunken fall.

‘He landed on the balcony next to mine,’ he exclaimed.
‘Yeah,’ I said, ‘but he started out from the window next to mine.’

Pictured above: two views from my window of the balcony below Room 16 shortly after the police forensics officer had photographed it – note in the upper one the spare change that must have fallen from the drunken guy’s pockets when they cut his trousers off him.
Posted by Ken Hollings at 10:55

Labels: Catching Up With, Journal

Ken, that sounds horrific, though you do a great line in reportage. Let me know if you ever return to Whitstable - I know somewhere you can stay where you won't be troubled by drunks or nightgaunts.

Thanks for the kind words, Glimmung - any advice on safe refuges in what must otherwise be a lovely seaside town would be most welcome. What disturbs me most at the moment is that when posting these images I remember thinking to myself that, considering they were taken when the room and the balcony were both crime scenes, there didn't seem to be any blood in either of them. After a couple of weeks, however, I can now see very clearly what I would not allow myself to see before. So I guess I am still catching up with this 'catching up with' entry.