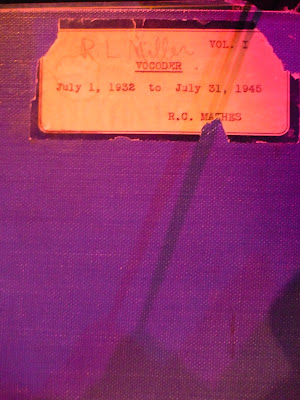 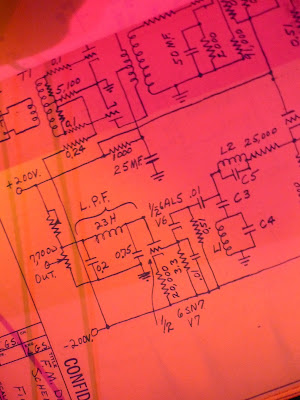 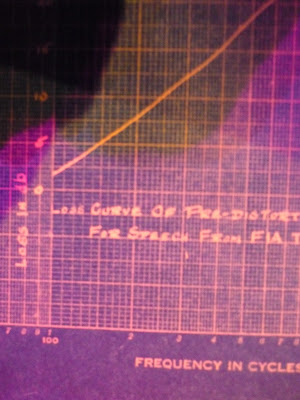 The above pictures were snapped onstage at the Palace Theatre in Whitstable, just prior to Dave Tompkins presentation at ‘Off The Page’ on the history of the Vocoder, as detailed in his book How to Wreck A Nice Beach. The ‘Vocoder Bible’, as Dave calls it, is a thickly bound collection of ‘secrecy system’ documents devoted to the development of the device at Bell Labs prior to WWII with redactions done by razor blade. The book contains memos typed onto tracing paper and actual blueprint schematics. Hastily photographing its pages under the strong glare of the stage lights made me feel a little like a spy from some Cold War intelligence agency – although the overall effect was probably more Maxwell Smart than Napoleon Solo in pop culture terms. Later Dave and I recorded a long conversation on the Vocoder, its history and its all-round strangeness, which is being edited at the moment and will be featured in the upcoming second series of ‘Hollingsville’, due to start on April 6. More on the show and the new series as and when it comes up: for reasons of security, you are now required to eat this blog post.
Posted by Ken Hollings at 07:10

Very much looking forward to hearing this.

Thanks for this, Keith. We actually recorded enough material to run, together with sound clips and related tracks, over two episodes of 'Hollingsville'. Fans of Denis Gifford's classic 1970s 'Pictorial History of Horror Films' shouldn't be disappointed either.

Wow! Pictorial History of Horror Films' was like a bible for myself and my mates back then. This is going to be good.

Hi Ken
Just checked The Resonance FM Schedule and I can't find anything about Hollingsville starting on April 6th.
When is the new series due to start?

Hi Keith - thanks for reminding me about this. For the second time in six months an agreement to start a new series of 'Hollingsville' on a specified date has turned out to be less than binding. I'll post something again when/if I hear anything more from the parties involved.

Thanks Ken. I look forward to that when it does happen. Enjoyed Spirit Horns Part 1