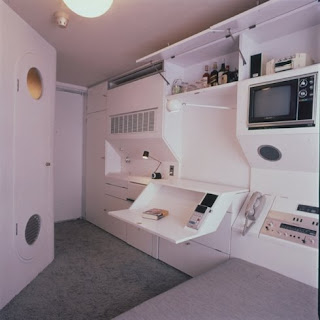 On April 1 there will be a launch for the anthology Love Hotel City: Twelve Authors, Twelve Visions of Japan, edited by Andrew Stevens of 3:AM Magazine and published by Future Fiction. The event starts at 7pm and is being hosted by Donlon Books at Bethnal Green, London E2. Check the shop’s website for details on how to get there.

Love Hotel City, a US publication which is available from both Amazon.co.uk and Amazon.com, contains my short story ‘First Love’, which I read for the first time at the Horse Hospital’s fifteenth birthday party and has been made into entry number three in the Lonely Creatures series of no-budget short movies Howard Walmsley and I have been working on whenever we have a spare moment. There will be a major Lonely Creatures event at the Green Room in Manchester later in the year: more on this in the coming weeks.

Top image: an interior view of one of the living units, the Nakagin Capsule Tower, Tokyo, designed by Kisho Kurokawa
Posted by Ken Hollings at 09:14