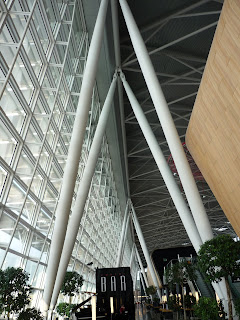 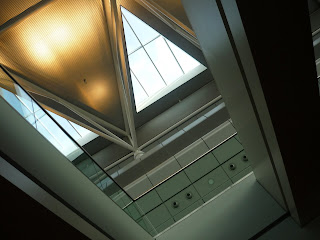 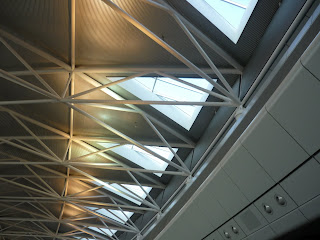 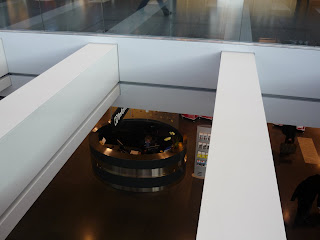 How can you be in a non-place when you’re actually moving from Landside to Airside, connecting two major elements together simply by riding an escalator? Probably when all you’re doing is following the signs and the flow of passengers from one location to the other. Completed in 2005, the design of Zurich Airport’s Fifth Expansion makes a great use of natural daylight and views of the surrounding area. Personally I was more impressed by having four Swiss International check-in staff gathered around one of the new machines, showing me how to process my own boarding card and label my baggage. I guess it must have been a quiet day.

The unregistered transition from Landside, where the main rail transport hub is located, to the Airside, where arrivals and departures flow through the same extended concourse, reminds me once again that in airports, hotels, supermarkets and shopping malls, the figure in transit is the primary location: everything else is just a fixed point by which to organize yourself. You become the focal point of a non-place – if only by default.

I love the peace and suspension of an airport departure lounge and welcome the time I get to spend in such a spectacularly featureless space. On the de-territorialized frontier of the airport you can pay closer attention to your responses. At home people tend to forget themselves: everything is too familiar a reminder of who you are. The focussed minimalism of the airport highlights everything from displays of confectionary, alcohol magazine, pens and watches to the sudden appearance of a sports car (however do they get it there?) for promotional purposes.

This seems an appropriate post after the visit to Phlight last week – from the very local to the spectacularly non-existent. Such elaborate conceptual engineering is impressive on any scale, however. Airside may only offer landscape views of airplane wings but it's courtesy of its custom louvred shading system which extends the full length of the building’s facade, offering a continuous view of the airfield while automatically adjusting itself to climatic conditions.

I also enjoyed the visual theme of bioluminescent deep-sea creatures swirling around the curved walls of the Internet Point – particularly the accompanying note about some fish using their own light as a ‘sniper scope’ to illuminate their prey with a red light only they can see – plus the regular open wells of visual space connecting one level of the concourse with the other – making it hard to feel that you’re lost even if you still don’t quite know where you are.
Posted by Ken Hollings at 07:37