Debut Release from The Howling - 'All Hail Mega Force' 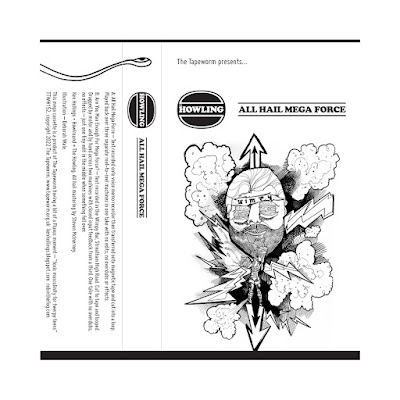 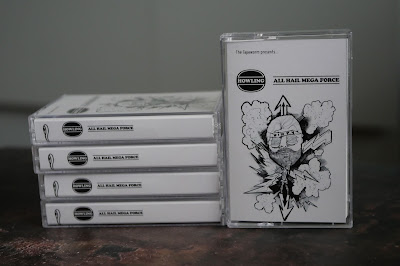 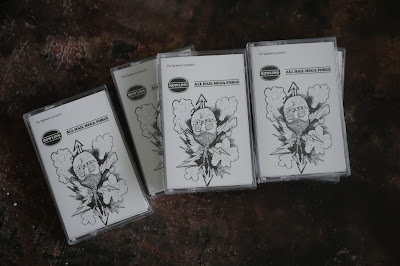 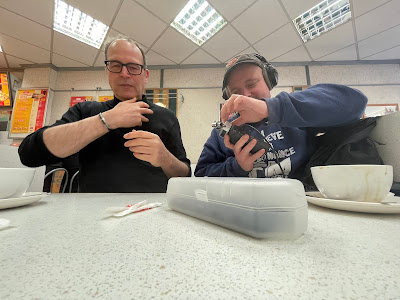 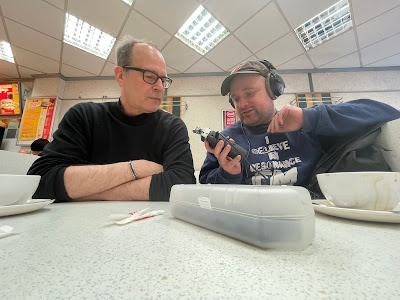 Imagine your worst fear a reality. All Hail Mega Force is the first full-length release from The Howling: a collaborative project I started with sound artist Robin the Fog, aka Howlround. Our work is inspired exclusively by our shared love of text, audiotape and trash aesthetics. Ken Hollings + Howlround = The Howling. Our first performance took place at the Iklectik in September 2019 as part of a special programme to celebrate Tapeworm’s 10th anniversary.

During the pandemic we managed to continue working and conferring since then, sharing sound files, texts and mixes online, and one of the main results has been this release for Tapeworm. The two extended tracks contained on this audiocassette reflect our shared interest in Fluxus and how informal rules and permutations can be set up to work themselves out through loops and repetitions. The idea of instant, disposable one-off creations appealed to us a lot at the time, particularly as both pieces were conceived and developed during different phases of Covid lockdown in the UK. A straight line connects Terry Riley’s tape experiments in Paris from the early 60s with our experimental recordings in the Wimpy Bar on Streatham High Road, one of our favourite meeting places.

The title and source material for these two pieces are derived from the 1980s kid’s adventure movie MegaForce, starring Barry Bostwik and Michael Beck. Designed to sell a range of Mattel hi-tech action toys, MegaForce tanked at the box office but lives on in the collective consciousness of those who share with The Howling a special love for Trash and Trash Aesthetics.

‘All Hail Mega Force’ was created by reading combinations of the words 'All Hail Mega Force' into a voice memo recorder, transferring it to tape, cutting the whole thing as a single long loop and then stretching it across three reel-to-reel machines simultaneously, using two pencils and a pint glass full of loose change to try and maintain sufficient playback tension. Over time the loop started to degrade, which accounts for the increasingly slurry and unpredictable playback, plus frequent ruptures caused by the tape becoming jammed and having to be tugged through the machine workings by hand. Twenty-four minutes later and the result was a completed new work and a slight backache.

The text for ‘Are You Man Enough For Mega Force?’ was recorded live in the Wimpy Bar on Streatham High Road, 28 November 2021. It was cut to tape and looped on 3 December 2021 at Warrior Studios, Loughborough Junction. Dragged by motor and then by hand across two tape machines with copious amounts of closed input feedback provided by a third rushing in to fill the gaps. One take with no effects or overdubs, but one tiny edit in the middle when something fell over.

Cover art is by the fabulous Deborah Wale of Tears/Ov, design and layout is by the amazing Philip Marshall, who was also responsible for The Howling’s Burger Bun Logo. Mega Mastering was by Steven McInerney. We are indebted to all three of them. Further details on this fine Tapeworm release can be found here.

‘The result,’ according to the  music blog Further, ‘is like an updated take on Alvin Lucier’s “I Am Sitting In A Room”, except that Hollings wasn’t at home but at the Wimpy Bar on Streatham High Street. After listening to approximately 360 brilliantly evolving iterations of the b-side’s single enquiry – “Are you man enough for Mega Force?” – pushed through Howlround’s macho manipulations, I can confirm, regrettably, that I’m probably not.’

Robin and I have continued working together since the completion of All Hail mega Force. There is a new album of text/tape/trash compositions, plus a couple of very exciting performances coming up later in the year, including any absolute barnburner at the BFI over the summer. With The Howling, you can be sure that your worst fear is a reality.