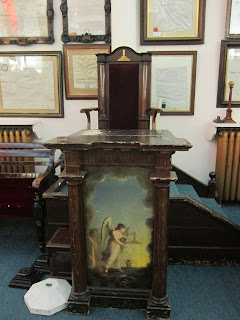 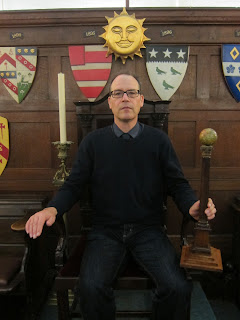 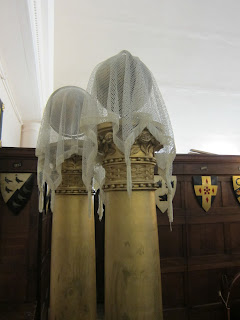 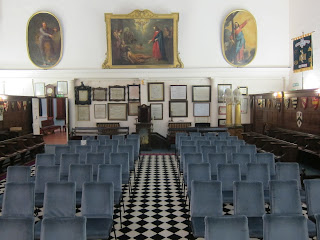 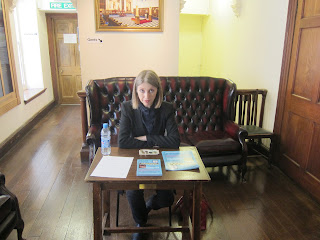 At the weekend I had the great pleasure to present a talk, ‘The Psychoanalysis of Trash’, at the English Heretic AGM, which was held this Saturday October 13 at the Masonic Hall in Bath. Although my texts, notes and images were all prepared in advance, nothing could prepare me for the arcane beauties of this splendid ritual space. As Rachel and I were also celebrating our eleventh wedding anniversary on the Saturday, the love of my life agreed to come along with me – because nothing says ‘you're special’ like a room full of mystical antiques and ancient devices. As it turned out, we both fell deeply in love with the Hall, taking a couple of hundred pictures between us, while Rachel also became the event’s official gatekeeper, collecting money at the door, giving out information and tour details to visitors and consigning the unworthy souls of the unenlightened to the shadowy pits of hell. There are too many great photographs to fit into one post, so I am going to release them one set at a time over the next few days in the hope that some of the richness and complexity of both the occasion and this remarkable space can be effectively conveyed. It’s more than just a good idea.


Pictured from top to bottom: an undisturbed corner of the hall; KH, crowned and conquering; veiled pillars; the hall in full effect; Rachel Hollings – ‘advance and be recognised’ – more soon.
Posted by Ken Hollings at 16:08

Thanks Ken, great postings, and believe me readers of Ken's blog, the talk on the psychoanalysis of trash was wonderful; tragic, funny, and a very cogent rendering of the archetype of the decadent child-king.