The Psychoanalysis of Trash – Lecture at Bath Masonic Temple 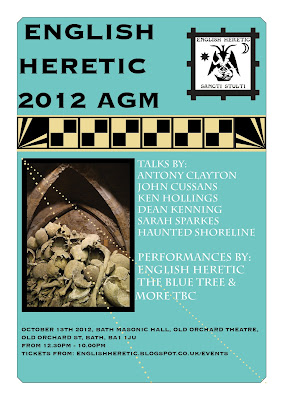 During the afternoon of October 13, this coming Saturday, I will be taking part in the English Heretic Annual General Meeting, which is taking place at the Masonic Temple, Old Orchard Theatre in Bath. My talk will be reflect recent researches into the life and aesthetic martyrdom of Ludwig II of Bavaria and how it has been echoed in the subsequent deaths of Crown Prince Rudolph of Austria, Elvis Presley of Gracelands, Tennessee and Michael Jackson of Neverland Ranch, California. You can find the full title below plus some information about the other speakers and performers taking place in this splendid event in the official press release, reproduced below. I do hope you will be able to attend this unique event in this magnificent venue.

English Heretic has the pleasure of inviting you to its annual general meeting. This year, we are delighted to host the AGM at the wonderfully ornate Masonic Temple in Bath. The AGM will be a forum for friends and collaborators of English Heretic to present findings from their creative research over the past year, as well as previewing work in progress and future prospects. The AGM will culminate in musical ceremonies by our most holy augurs to propitiate imaginative nourishment for the coming year. The AGM is open from 12.30pm to 10.00pm. We are honoured to welcome a plethora of exceptionally interesting and talented guest speakers covering a rich canvas of hermetic, aesthetic and ontological material.

Antony Clayton – Gentleman of Hastings
As a taster for his recently published book Netherwood: Last Resort Of Aleister Crowley,  Antony will be taking the audience on an annotated guide to the remarkable guesthouse where the “Wickedest Man In The World” spent his final years, playing chess, injecting heroin and receiving an impressive cast of visitors. A unique memoir of place and person Antony's “Netherwood” is available as limited hard back edition, including over 40 photographs and illustrations.

Ken Hollings – The Psychoanalysis of Trash: The ‘Fever of Matter’ and the Aesthetics of Industrial Decay
Starting from Huysmans’ A Rebours, in which the pasteurization process is a praised as a means of transforming poor quality wine into copies of fine vintages, this talk will examine trash as the original prima materia of art. Alchemic processes of transformation (the ‘fever of matter’) are invoked, alongside early ‘hysterical’ practices identified by Sigmund Freud in which discarded objects associated with the dead king take on a sacred aspect, to trace connections between Crown Prince Rudolph of the Hapsburgs and King Ludwig II of Bavaria on the one hand and Elvis Presley and Michael Jackson on the other. All four of them were vilified for their excessive behaviour and ‘bad taste’, and all four of them were the victims of self-inflicted – one might almost say sacrificial – violence in one aspect or another. For an earlier version of this lecture, first given at Neville Brodie’s Anti-Design Festival, click here.

Sarah Sparkes – Remember. THE END.
Sarah’s talk will contextualise this year’s AGM venue with regard to her current work for a forthcoming exhibition on Theatrical Dynamics at Torrance Art Museum. A phantasmagorical travelogue through personal and west country history, the talk will develop themes from Sarah’s GHost project, presenting her great grandfather’s magic lantern slides and discussing their unusual connection with The Tolpuddle Martyrs secret society.

Haunted Shoreline – Plumbing the depths on the south coast of England
Hermes Trismegistus and Salvador Dali chase giant psychedelic beachballs across fossil-strewn cliffs, while Georges Bataille performs unspeakable perversions with Max Ernst’s frottage sticks and a vampire squid. At The Haunted Shoreline, a stretch of the English coastline becomes transmuted, emerging as a wondrous Hermetic Theatre in which secret Nature is unveiled and the shadowed recesses of the mind illumined. Where occult beachcombing meets surrealist psychoanalysis, and everything crackles with life.

The Blue Tree perform a Lethbridge moog ritual.
Matthew Shaw is a Dorset based musician, artist, photographer and songwriter, he has been making and releasing music since the mid 1990s. Recent work has focused on compositions based on single locations such as Lanreath, Fernworthy, Seatown, Zeist and Barnoldswick. Matthew is also an active member of the bands Fougou, The Blue Tree and 230 Divisadero. The Blue Tree is Matt’s collaborative project with Andrew Paine.

English Heretic – Collision! The Devil Drives Out
An electroacoustic rendering of their forthcoming album provisionally titled “Collision! The Devil Drives Out” imagines a post-mortem trip along the Bath Road in Berkshire. A death coach carrying the tarotic fools to a metal elysium beneath the heathrow flyer, their cards read by Frieda Harris: Aleister Crowley directs Dr. Terrors House Of Horrors, ritual cinematography by Dick Bush. “The Mangled Destinies of Robert Cochrane, Angel Blake, Dr. Robert Vaughan and George Sanders” photographed by Peter Beard, in kodachrome kalas somewhere near 1973. Mall timeslips programmed by Ian Ball. Reanimated Ex Men, anti-heroes, under the tutelage of wheelchair bound mystic John Levy, a module in psychohistory delivered with the heavy hand of a violent cartoon.