Requiem for the Network - Essay Five, ‘Heads in the Clouds’, Tonight 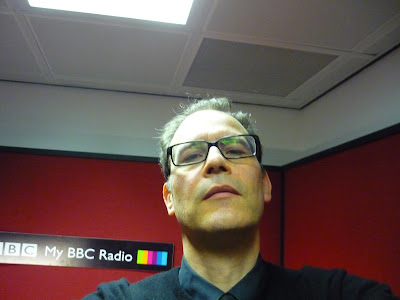 ‘Heads in the Clouds’, the fifth and final essay in my series for Radio 3, Requiem for the Network, goes out tonight, March 25, at 23.00hrs.

A map of central Europe drawn up in the 12th century could still show post roads established five hundred years previously upon what remained of the old Roman road system. Since then technical engineering has increasingly shaped moments of social and cultural transition. From the earliest centralized networks, when all roads led to and from Rome, to the decentralized networks of the European Enlightenment all the way through the distributed networks of the nuclear age, our paths have never stayed the same for very long. The networks might soon be replaced by ‘cloud computing’, a method of data storage which will allow you to access data from any terminal, anywhere, at any time. The meteorological metaphor seems appropriate: as data becomes another constantly-shifting element in our global environment. But doesn’t being anywhere also mean being nowhere?

The Wire asked me to make a statement about ‘Requiem for the Network’, so here it is:


The aim of this series of short essays has been to develop new critical perspectives on the profound changes brought about by networks in human development – it was a theme I had been working on in a number of lectures I have been giving to postgraduate communication design students at Central St Martins and elsewhere. Networks are both a form of architecture and a communications medium at the same time, which can lead to some quite vague thinking with regard to their power and effects. It does not, therefore, surprise me that the Network – usually understood as the Internet – is being treated with the same cheery and enthusiastic innocence that greeted electronic media like TV, radio and computers in the 1960s. That’s why my series of talks takes the form of a requiem - to lay some of this more optimistic thinking to rest. I am not making this argument in order to disparage networks or to present them in negative terms - it’s too late for that in any case. I am presenting these talks in the hope that people will take the Network more seriously and think about its history and development a little more critically. The Network continues to change our lives, but we’re not really taking the time to understand how or why this is happening.

Essays one, two, three and four from the series are currently available from BBC i-Player - each one, however, will only be available for seven days after the date of original broadcast. Thanks for listening.

Pictured above: KH in the studio at Henry Wood House – Is that it? Can I go now?
Posted by Ken Hollings at 09:13

Labels: Live Media, Requiem for the Network, The Bright Labyrinth

Hi Ken. Despite going out on Friday, episode 5 still doesn't seem to be available on iPlayer. Do you know if there are plans to make it available?

Hey Ken - still no ep 5 on iPlayer. Any chance you could drop by here and give us the heads up on that?

I am still waiting to hear back from Mark Burman, my producer, about what has been going on with i-Player. As soon as I hear anything I will post something up on the blog - I'm not feeling too optimistic about the outcome but will keep trying. In the meantime this offers another reminder of just how unsatisfactory i-Player is as an online resource - strands like the R3 'Essay' should be properly archived and accessible to the public at any time. Thanks to everyone for taking the time to post comments or email me about this.

I share exactly the same thoughts about iPlayer Ken, and it has also occurred to me in the past that 'The Essay' seems like a particularly deserving candidate for being archived, in the same way that programs like 'In Our Time' and 'A History Of The World In 100 Objects' currently are. It would be nice if the bbc could get their act together and be less erratic about what they choose to make available to the public. It's a shame that such good quality radio is only available for a short time and then pops out of existence, at least as far as the public are concerned.

Thanks for getting back to us anyway, It must be frustrating for you too. I really enjoyed episodes 1-4 (especially 4), so keep up the good work :-)

Hi Ken. The idiots at iPlayer have put it up - all 9 minutes and 4 seconds of it - it ends mid-sentence with the last 5 minutes missing.

This has been a wonderful series (well, up to the 9 minutes 4 seconds that I heard of episode 5 thanks to iPlayer).

Thanks so much KH.

much enjoyed your essays on R3 - and have been trying to listen to the last one on iPlayer for several days. First of all it wasn't available at all for some mysterious reason. Now it's there, but when you start playing, it truncates into 9 minutes... Is there anything you can do about it?

Many thanks for all your comments about my 'Essay' series and also for your concern and sympathy over the manner in which the last instalment was handled on i-Player. I have continued to draw the attention of my producer Mark Burman to this matter, but there is only so much that he can do - Mark is an excellent producer and my main contact with the Powers That Be, but i-Player is run by a separate department, which is effectively two towns over from where Mark and I are located. Whoever runs things there should perhaps consider what made 'Speechification' such a popular site in the first place. In the meantime I shall be back on the network again very soon so watch out for that.

Surely someone, somewhere must have an "illicit" complete recording of the last episode, that could be posted somewhere for downloading?

any chance of a transcript of the final episode?? please

It's maddening to have listened to 5 episodes and miss the concluding five minutes ... conspiracy? or just inept iplayer staff

I'd be very happy to supply anyone who is interested with a PDF of the text for this or any of the previous talks in the series - just email me via the address listed in my blog profile. Again thanks for all your comments.