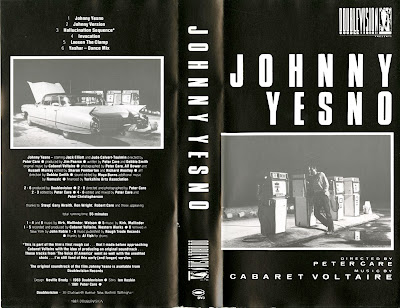 Anyone in or around the Sheffield area tomorrow evening (Friday, April 23) might like to know that I will be giving a talk at a special one-off screening at the Showroom Cinema of ‘Johnny YesNo’ , a short film by Peter Care featuring a soundtrack by Cabaret Voltaire. The film was originally released on Double Vision, the Cabs’ own video label, back in 1983: on the same tape were examples of further collaborations between the two parties. Tomorrow night’s programme, part of this year’s Sensoria festival, will also feature newly reworked versions of this material predominantly based around Richard H Kirk’s remixes of the original tracks like ‘Invocation’, ‘Loosen the Clamp’ and ‘Yashar’ combined with Care’s digital reshoots inspired by the videos he made for them at the time. Expect other surprises as well. The whole thing is scheduled to start at 8.30.

Pictured above: the original cover art for the Double Vision videocassette release of Johnny YesNo, courtesy of RH Kirk – design by Neville Brody.
Posted by Ken Hollings at 15:35