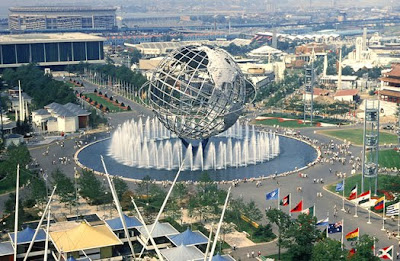 This was Chrysler’s proud announcement when marketing the ‘57 Plymouth as part of its new ‘Forward Look’ campaign. With the calm assurance of someone asleep at the wheel, the public started to adjust its rear-view mirror. Progress is for those who can’t quite take in the future. It comes at us a second at a time, its approach indicated by the changing design of a car radiator grill, the cut of a T-shirt, the lettering on a stop sign or an advertising display. Progress becomes the inevitable by-product of daily life piling up before us, taking away our dreams and assumptions, encouraging us to view tomorrow as little more than a slightly different version of today. We have no choice but to allow ourselves to be moved forward: things change without any outward sign of effort or volition on our part. The future is, after all, what happens after you’re dead, which also means that we are condemned to inhabit someone else’s future: dreamed of and planned for by others in the name of progress. No one can embrace progress without also accepting that the dreams and assumptions of the dead have somehow shaped their present circumstances.

Welcome to the inaugural episode of my new series ‘Hollingville’, which is scheduled to go out live and unscripted at 7.00 pm, Thursday April 15 on Resonance 104.4 FM. My main studio guest will be writer Steve Beard, plus – if we can swing it in time – designer and infonaut Matt Jones in pre-recorded conversation from somewhere in deep space. Expect live and unscripted wanderings around voodoo science parks, examinations of cities as battle suits and thoughts on pods, capsules and world expos. Specially commissioned musical interludes will be by the ‘Hollingsville’ composer in residence, Graham Massey, with ins and outs by Indigo Octagon. This programme will be taking place in your future: so you’d be crazy to miss it.

See also:
‘Hollingsville’ To Start On Resonance FM
The Future is What Happens After You’re Dead
Paleofuture
io9