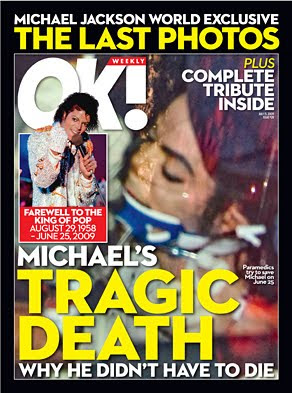 Zero Books are about to publish their long-awaited anthology of essays on the death of Michael Jackson: edited by Mark Fisher, The Resistible Demise of Michael Jackson includes my latest essay ‘And Tell Sad Stories of the Death of Kings: At The End Again with Elvis and Michael’, which was completed over the summer while media speculation concerning the disposal of the star's remains was still at its height. Here are some extracts from the Zero Books press release - you can find a full version on their weblog:

Providing an antidote to the mixture of unthinking sentimentality and scurrilous prurience that Jackson usually attracts, this book offers impassioned and informed answers to the urgent questions that Jackson’s death has posed. What was it about Jackson’s music and dancing that appealed to so many people? What does his death mean for popular culture in the era of Web 2.0? And just how resistible was his demise? Was another world ever possible, something perhaps utopian instead of the consensual sentimentality of a world hooked on debt, consumerism and images? The essays in The Resistible Demise Of Michael Jackson consummately demonstrate that writing on popular culture can be both thoughtful and heartfelt. The contributors, who include accomplished music critics as well as renowned theorists, are some of the most astute and eloquent writers on pop today. The collection is made up of new essays written in the wake of Jackson’s death, but also includes Barney Hoskyns’ classic NME piece written at the time of Thriller.

The book is available for order on Amazon.com and Amazon.co.uk.

There will be a launch event on December 2: expect a full report and updates in due course.

Pictured above: MJ on the set for the very last time, from the Black Missouri website.
Posted by Ken Hollings at 09:45