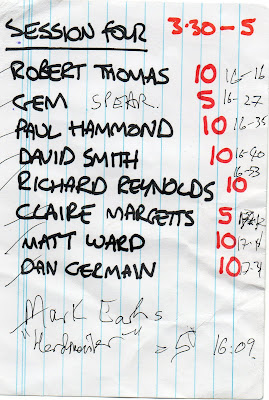 The above is the index card Russell Davies handed me at the start of Interesting 2009 after I had elected to compeer the last session of the day. The number in red next to each name indicates how many minutes each speaker was allotted to speak on their chosen topic. As you can see from my spidery scribble, most of them showed remarkable self-discipline: the late start times are only indicative of the degree of AED or 'accumulated event drift' (otherwise known as 'gig time') that inevitably occurs on occasions such as these. My sincere thanks are therefore due to Robert Thomas, Gem Spear, Paul Hammond, David Smith, Richard Reynolds, Claire Margetts, Matt Ward, Dan Germain and the ...uh... ‘Herdmeister’ for making my job easier yesterday. I’ll post an Interesting 09 site report with some actual photographs once I’ve sorted them out: as usual there are far too many long shots of people onstage leaning anxiously over laptops.
Posted by Ken Hollings at 09:27