Catching Up With Terminal 5 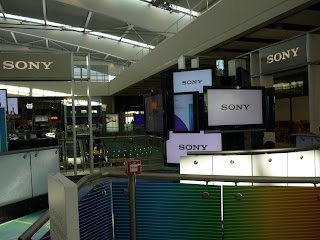 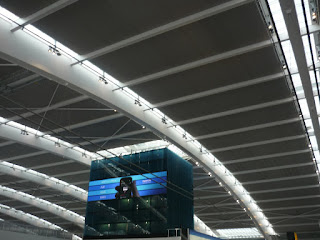 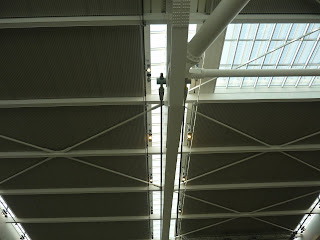 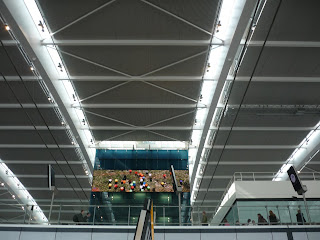 Perhaps in some later post I will write about the monstrous jointed frame holding up the undulating single span roof and glass facades of what is currently the biggest freestanding building in the UK: designed to be ‘dismantled and reconfigured as future needs change’, according to an entry for Heathrow's Terminal 5 on the Rogers Stirk Harbour and Partners website, this definitely requires a posting all of its own.

Instead I think it’s worth spending a little time looking at the deployment of flat screens within T5’s main departure hall. While the main great curve and the angles of the supporting skeleton ensure that it’s almost impossible to establish a useful baseline from which to view this vast space – even the floor itself seems less than level at times – the arrangement of advertising displays offers a series of reassuring perspectives. This dividing up of space even appears to extend into the arrangement of the roofing panels. The hidden geometry of the universe and the hidden geometry of electronics – as indentified by Mark Wigley in his historical overview of network design – are simultaneously revealed in the arrangement of these multiple flat-screen displays.

The notion of the airport as commercial development – as exemplified by the likes of John Portman in their exploitation of the supersized mall as a basic model – is still there. It’s hard, for example, not to run into the red sports car last spotted inside Zurich’s Fifth Expansion.

At the same time, however, there is something about the insertion of these high-speed texts and images into the environment via multiple arrangements of screens that suggests that it is less to do with conveying a message than with the setting out of coordinates. Their rapidly moving surfaces are going to catch your eye anyway, so you might as well use them to figure out your precise location. Like them, you are only passing through. Welcome to the Labyrinth.
Posted by Ken Hollings at 11:35