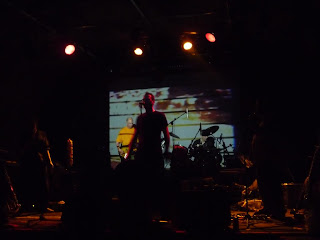 Graham Massey has emerged from working on the upcoming Sisters of Transistors album long enough to complete final mixes of the two live sets Biting Tongues performed at Shunt Vault last November 21. One track – a super-nasty version of ‘Heart Disease’ recorded on Friday November – has just been added to the Tongues MySpace page and is well worth visiting. The Tongues Friday-night set started way after midnight, and by the time we came to this part of the performance, around 1.00am, most of our audience was in an advanced state of chemical modification. Down in front of the stage I swear I saw some people trance-dancing while others were playing air guitar – and there was one guy writhing around on the floor who seemed to be attempting both at the same time. It made you feel glad to be alive.

Also just posted on YouTube by Howard Walmsley is a montage of clips and music from Feverhouse, the movie we worked on together and which was later released on video by Factory Ikon. Feverhouse had its first screenings at the Riverside Studios and the Royal Northern College of Music, before a two-week run at the ICA. Howard is currently in the process of setting up a Biting Tongues TV page, which will feature some live and archive footage, together with a final edit of ‘The Dragman’, a new Biting Tongues video storyboarded by Howard and shot at various locations in Beijing a couple of years ago. A version of the video's soundtrack is currently available from the Tongues MySpace page – simply click on ‘Dragman 2008’ to hear it.

The above image: Biting Tongues at Shunt Vault, November 21 2008. Photograph by Agent King
Posted by Ken Hollings at 09:12