A Memory For Stockhausen Day 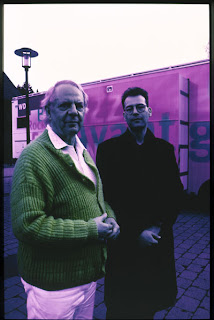 Was in the front row at the Royal Albert Hall for a special event at this year’s Proms to commemorate the work of Karlheinz Stockhausen, who died at the end of last year. To hear Gruppen (1955-57) for three orchestras back to back with Kontakte (1959-60) for piano, percussion and electronics is to be reminded once again of how bold and challenging his musical vision was during this intense period. Each work seemed huge: undiminished by the passage of time or changes in custom.

It brought back memories of meeting Stockhausen at his home in Kürten, West Germany, to talk with him at the end of the last millennium.

Right at the start of the interview, as soon as my tape machine had been switched on, the pen in my hand started leaking. Stockhausen was wearing crisp white jeans, a white Indian cotton shirt and a fluorescent orange cardigan. We were sitting side by side in his home on what looked like a white patio sun lounger upholstered in pastel shades. The room was immaculately clean and tidy with bright white walls. I had black ink all over my fingers. At the end of the interview Stockhausen looked me straight in the eyes. ‘I like you,’ he said.

Stockhausen had told me of his desire to be reborn towards the centre of the universe to continue with his music. Back in the hotel room, unable to sleep, I channel-surfed until I came across a programme showing satellite footage of the surface of the Earth accompanied by ambient techno music. Was it broadcast live? A caption on the screen revealed that we were passing over the Arizona desert. It was a dusty ethereal brown.

I remembered how Stockhausen had responded when I suggested that we tended to pay homage to that which is not there, which is why space travel was being celebrated so much because it seemed more unattainable than ever. ‘No, it’s absolutely clear,’ he said with an enthusiasm that seemed to come from somewhere deep inside him, ‘I don’t know if you know the new books from the Hubble telescope, publications from NASA, but it’s absolutely clear that they will be on Mars in 2012…I know that they are going to go very quick now into the solar system.’ I loved that moment. It was my favourite part of the entire interview.

The photograph of Stockhausen and me standing together was taken 12.3.99 by Philip Lethen, using infrared film (see www.philiplethen.com/). The text above is adapted from my piece ‘Karlheinz Stockhausen, The Outer Universe And Me’ written for the Sydney Biennale 2002. For the complete transcript of my conversation with Stockhausen go to http://www.thewire.co.uk/articles/140/ My profile of Stockhausen appeared in issue 184 of The Wire for June 1999.