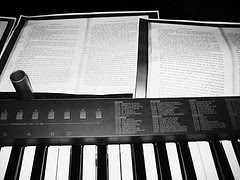 At a very special event held at the Horse Hospital on Thursday night, Cathi Unsworth, eminence blonde of the London Noir scene, summoned up the spirit of departed crime writer Derek Raymond with the aid of bell, book and candle. The bell was rung between each act of remembrance, the candle burned with a feeble determination throughout the evening and the book, of course, was Raymond's masterpiece I Was Dora Suarez.

Those attending the Suarez Seance included Richard Strange, channeling one of the scenes from Dora Suarez, accompanied by James Johnson and Terry Edwards from Gallon Drunk, recreating their performance with Derek Raymond at the NFT back in 1993. Photographer Simon Crubellier was on hand to capture the moment - I am indebted to him for the photograph reproduced above of Johnson's equipment, positioned to one side of the summoning table. Those interested in seeing more should go to www.flickr.com/photos/simon-crubellier/ - there is a sardonic tenderness to his work, as if he were constantly reminding the world to mind its manners.

The Sohemian Society was in attendance, doing great work to honour some of the more wayward lives of this great and disgraceful city, as was crime novelist John Williams and Geoff Cox, who brought Derek Raymond and Gallon Drunk together in the first place - it was, he recalled, an ugly time and London was an ugly place - the connection seemed a wise one.

Communing with dead spirits, even ones who don't expect much after death, requires a certain degree of optimism. Derek Raymond, after all, could only be born after public-school delinquent Robin Cook killed himself off. But for all the pessimism of his books, Williams remarked, Cookie remained the very soul of optimism in life - which might explain the number of failed marriages he left in his wake. Present at Cook's death, holding his hand as the man's spirit departed this world, John Williams still recalled his feeling at the time that there seemed little to hope for beyond this world. Except perhaps in the memories of others.

For more information on the Suarez Seance or to source books and CDs etc, please visit http://www.horsehospital.com/ or http://www.sohemians.com/
Posted by Ken Hollings at 09:36