‘Live It’ by Biting Tongues – Some Notes and Afterthoughts 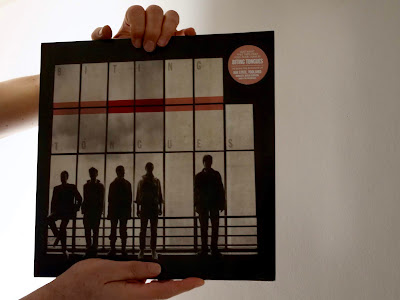 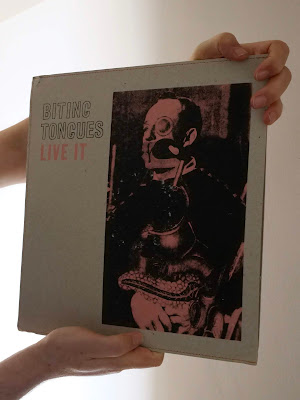 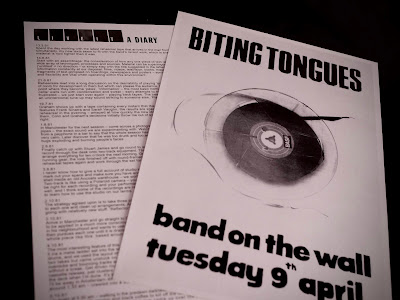 Finally received my author’s copies of Live It in the morning mail. This is a collection of early Biting Tongues recordings released on vinyl for the first time by Finders Keepers. The core material for this album was drawn from a cassette-only release put out in the early 1980s by Manchester punk label New Hormones, also under the title Live It – six of the ten tracks in fact. The others are outtakes from the various Live It sessions, which actually sound so interesting that I wonder why they weren’t included in the original release.

The first thing that struck me about the vinyl version of Live It was the insight displayed in the new cover design – it pointed me towards something I had not really noticed before. On the front of the regular edition you can see one of those standard band photos everybody does from time to time for promotional purposes. Biting Tongues never seemed to do that many photo sessions as a group in the early 1980s so there probably isn’t that much material to choose from – at least not from the time when these recordings were made. We were being photographed in the stairwell of some mall or arcade. I really don’t remember where it was – I was not living in Manchester at the time, although the rest of the band were. I used to commute between my home and theirs every other week or so for rehearsals, recording sessions, performances etc.

As I said, I don’t recall the location of the tall high windows featured in the front-cover photograph – but what did strike me about them is how they neatly separated me from the other members of Biting Tongues, as if I had been set aside in a box on my own. I am similarly divided from the band on the back cover as well. Graham, Colin, Howard and Eddie had been photographed standing together in some murky alleyway – the print is high contrast and very post-punk. I appear alone in a photo insert sitting at a typewriter and a microphone, illuminated by a desk light. This time I do remember when and where this photograph was taken – it was during a performance Biting Tongues gave at the Institute of Contemporary Arts on the Mall in London. It was our first ever London gig. We would include all kinds of one-off performance elements in these early shows; and on this occasion it had been arranged that I would actually type up new portions of my text live onstage. Then I would deliver them from the desk while the rest of the band went on playing.

Somehow the cover design for this release perfectly encapsulates my relationship with Biting Tongues during the time when I was a member. It comments on the different and separate processes at work within the band both within the studio and outside it. The rest of the band worked really hard on the music we recorded and performed. They worked collectively – on a regular basis. They also worked intuitively around very precise formal agreements. Meanwhile back in London, I worked on the texts alone and in isolation – I’d receive rehearsal tapes from the band in the post and use them to frame and shape what I was writing. I was more interested in textual collage, cut-ups, words coming from unknown or unforeseen sources – words overheard from a world you only ever glimpse from the corner of your eye.

I would use all kinds of techniques at the time: take, for example, the texts for ‘42’ and ‘43’, which you will find on side one of Live It and which are also from the original audiocassette release. These were actually derived from one long mosaic-like text made up from laying random horizontal grids over the pages of existing books and noting down what the grids would either underline or strike through. I can’t remember all of the source material now, but listening to the full text on ‘43’ I know some of the fragments and phrases are from works by Antonin Artaud and Georges Bataille. Yeah – I know. Pretentious. The NME told me as much at the time, and so did just about everyone else.

On side two, the track that interests me the most is ‘Read This’, the text for which was derived from a chain letter sent to me by someone who claimed that the government was trying to control their mind using microwaves. Their words were cut together with some short texts produced by my tuning through an FM radio dial late at night and transcribing the results. On the first two tracks on side two you can also hear me cutting into the words themselves, to produce abstract sounds. These proved too difficult to learn for live performances – your mind has nothing to grip on to. Instead I used to do readings from them at Richard Strange’s early Cabaret Futura nights rather than including them in any Biting Tongues performances. John Peel’s producer John Walters, recorded one of my Cabaret Futura readings and played some of it on his Radio 1 show, declaring that I was probably ‘the death of rock and roll’.

If he was right, I don’t think I did a very good job of it. Looking back, I can see that I was always a writer working with a group of musicians – certainly not a singer or performer in any conventional sense of the word. One day I will write more about the few short years I was with Biting Tongues. It was a great time to be working with music, both live and in the studio – everything was up for grabs back then; and there was a real appetite for experimentation, however rough and raw the outcome might be. I think Graham Massey’s selection and editing of the tracks on Live It conveys all of this extremely well. It took over three decades to understand the full implications of all that, but it was worth the wait for these recordings to be available at long last in a vinyl edition. Today, looking back on them and having no choice in the matter, I now think of the texts and my delivery of them on this album as being my first published work. Sometimes the past has a way of telling you what you should already have known.

Order details for Live It from Finders Keepers can be found here.