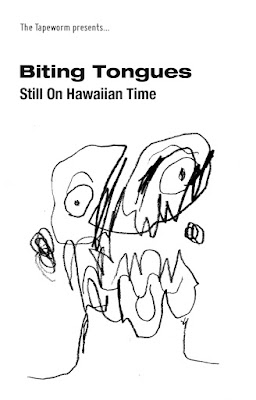 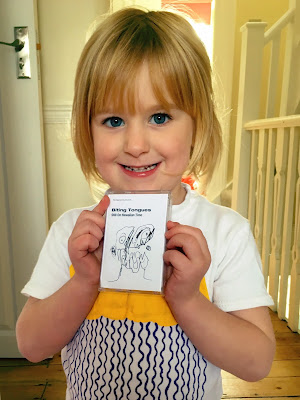 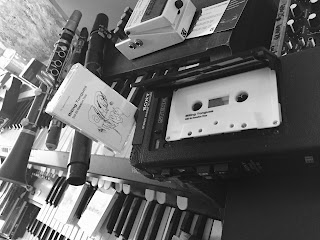 I have another audiocassette available from Tapeworm, the label that brought you my ‘Works For Magnetic Tape’. Graham Massey and I were asked if there was any unreleased Biting Tongues material that might be suited to an audiocassette format. Biting Tongues was one of my earliest writing projects, composing and performing texts over the (as one music journalist called it) ‘post-punk, avant-funk’ racket created by this Manchester-based group. I was living in London at the time, so the relationship that developed between us was an unusual one, but it did result in some interesting one-off performances. Graham and I spent part of the summer going through some of the recordings made in the early 80s, and selected a couple of particularly interesting ones.

‘Still On Hawaiian Time’ captures two Biting Tongues performances from this later period. The Library Theatre in the centre of Manchester was a large seated venue with an even larger stage, meaning that the group members could spread out more and incorporate additional percussion, tapes and electronic devices. It also shows Biting Tongues cutting up and rearranging themes from different recordings, allowing for the free play of existing material – the performance also anticipates their work on ‘Feverhouse’: their full-length experimental feature film released in 1984 by Factory Records’ video offshoot IKON, together with a soundtrack album as FAC 105.

‘Feverhouse’ had its first London screening at the Riverside Studios in Hammersmith as part of Factory’s residency there in the summer of 1984. Biting Tongues had played the same venue three years previously at a time when they were beginning to expand and broaden their sound. The improved facilities available in a theatre venue, including greater space, better acoustics and more time for a sound check, meant that Biting Tongues could concentrate on the performance, producing some of their most aggressive and demanding work.

During the early 1980s Biting Tongues excelled as a live band, always seeking to challenge both themselves and their audiences. These two recordings are fascinating documents that convey some of the immediacy and commitment of their performances – something that can still be felt in these old tapes some thirty years after they were first recorded.

You can hear a segment from the Library Theatre performance as part of this Tapeworm mix created for Katie Gibbons’ show on 10 Twenty Radio.

I am particularly pleased with the cover art for this cassette, probably the best that a Biting Tongues release has ever had: ‘Monstergod’ is by Alma McMillan, and she can be seen holding a copy of the finished product at the top of this post. Seriously, this is worth buying for the artwork alone. You can order a copy online from the Touch Shop - it’s in an unrepeatable limited edition and fabulously cheap.

Pictured above: the pack shot, the artist (by kind permission of the artist's father), Graham Massey's Walkman, fully loaded.
Posted by Ken Hollings at 08:41