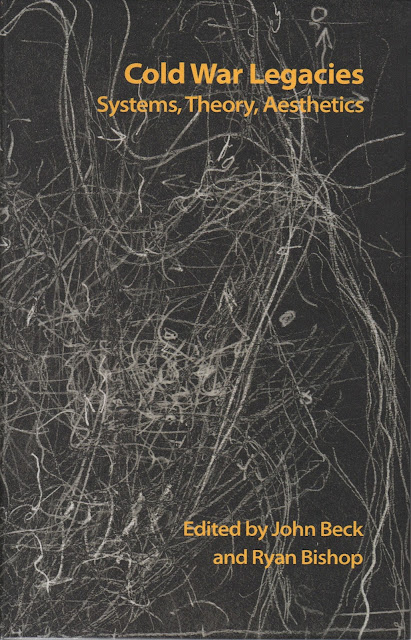 I have an essay in a new collection of essays published by Edinburgh University Press. Cold War Legacies: Systems, Theory, Aesthetics is edited by Winchester School of Arts's Professor Ryan Bishop and Professor John Beck of the University of Westminster. The book connects Cold War material and conceptual technologies to 21st century arts, society and culture. From futures research, pattern recognition algorithms, nuclear waste disposal and surveillance technologies, to smart weapons systems, contemporary fiction and art, the contributors to this book shows that we live in a world imagined and engineered during the Cold War.

I am particularly pleased with this collection, not just because it includes contributions from the likes of Ryan Bishop, Jussi Parrika and Neal White, but because it contains the very last essay to appear in print that was composed while I was still undergoing chemotherapy for colon cancer back in the summer of 2014.  The drugs they were giving me at the time had a strange way of enhancing my powers of concentration, meaning that whatever I wrote under their influence remains special to me. There is still some material from a larger project to be published at some point, but that can wait for the moment. In the meantime, here is the abstract for the essay, plus some key words to get you started:

Abstract
Just as the ‘nuclear family’ was seen as a strategic element in the Cold War, dispersed into suburban enclaves of self-contained domestic units, so the ‘network family’ of today, distributed across social media now finds itself defined as a strategic element in a warring online community. This paper seeks to examine the shift in domestic security from its deep roots in the nuclear family under threat of nuclear destruction to the network family of today whose elusive and fragmented presence is experienced as both a threat and a defence position. Delueze and Guattari’s ‘desiring-machines’ are examined in terms of the impact Norbert Wiener’s theory of Cybernetics upon both popular culture and the theoretical models proposed by Marshall McLuhan and Herbert Marcuse. Even as the mass media communicate today’s moral panics over online security, antisocial ‘trolling’ and whistle blowers – which already seem a quaint piece of media archaeology – actions are depicted and explained in terms of a domestic instability, first perceived during the Cold War 1950s and 1960s, from ‘slacker’ Ed Snowden to Anonymous adolescent hackers and Julian Assange’s displaced national status.

And here are some more details about Cold War Legacies: Systems, Theory, Aesthetics from the Edinburgh University Press:

Makes connections between Cold War material and conceptual technologies, as they relate to the arts, society and culture