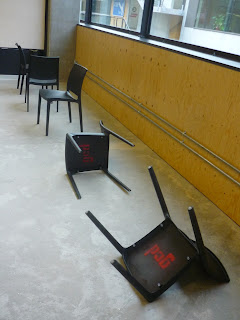 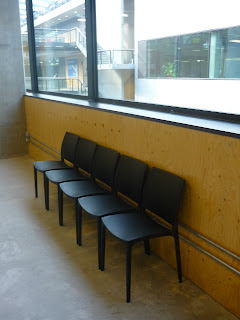 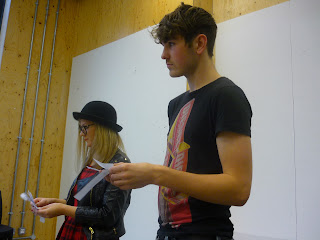 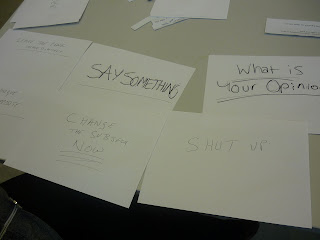 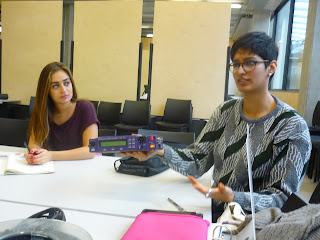 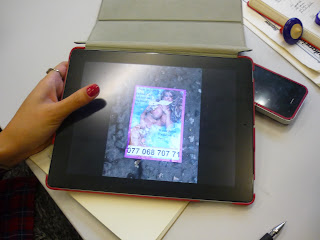 Over the past few weeks I have been running a series of experimental one-day encounters with BA Graphic Design students who are particularly interested in the current relationship between communication design and interactivity. The idea was to engage with a relatively simple proposition but also to explain your response as clearly as possible: the three propositions I put to them were as follows:

Five Chairs
Arrange five identical plastic chairs in a designated space to convey an idea, proposition or concept. This can be a mathematical progression, a geometric arrangement, a social encounter, a narrative environment or an argument: you decide – but be prepared to explain the thinking behind your arrangement to rest of the group.

Talking Utopia
You are invited to take part in a live panel discussion with a difference: you can start out as a panellist, a member of the audience or a moderator, but that’s not where you’ll end up. A series of cue cards can change the composition of the panel, the direction of the discussion as it goes along and who gets to be a moderator. The subject is ‘Utopia’ – in other words your ideal world. Make it happen.

Dead Media Hunt
From telescopes and lorgnettes to VHS videocassettes and Motorola phones, ‘Dead Media’ is the term coined to describe any communication platform or device that has been rendered ‘obsolete’ by technological progress. However, no media ever truly dies (just take a look inside your pencil case if you don’t believe me). You have 60 minutes to find an interesting example of ‘dead media’, bring it to table, demonstrate it to the group and explain why you find it interesting.

The students all responded with great enthusiasm and insight. The pictures taken above offer some photographic record of each studio session – from top to bottom: two images each from ‘Five Chairs’, ‘Talking Utopias’ and ‘Dead Media Hunt’.