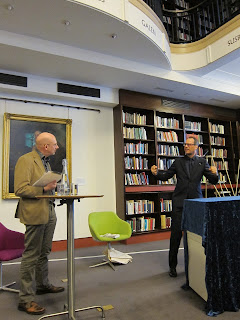 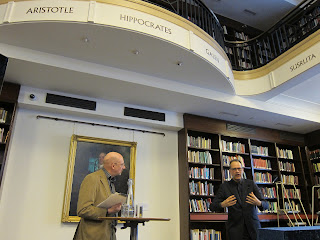 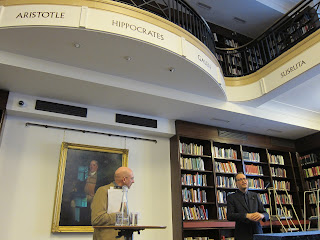 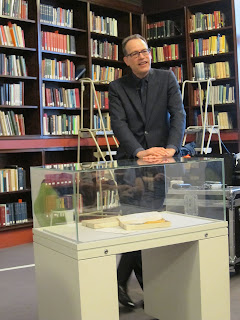 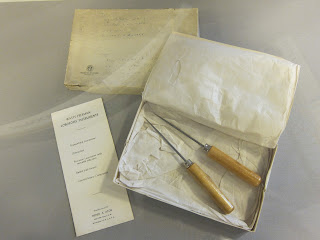 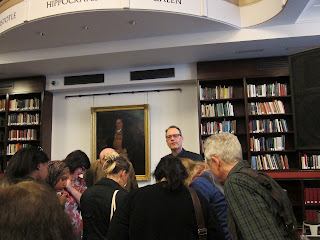 I said in my previous post that the revealing of the ‘mystery object’ from the Wellcome Collection’s vast archive of medical artefacts and documents at ‘The Thing Is…’ would be absolutely worth waiting for – and indeed it was. Even though I had known in advance that the item in question would be William Sargant’s Lobotomy Needles, still neatly packed away in their box with his home address written in ink on its cover, I was still quite in awe of the actual moment of uncovering. Already safely inside their Perspex display case and hidden beneath a blue silk wrapper when I arrived in the Wellcome Library’s reading room, where the event was to be held, they formed the unacknowledged focal point of my initial conversation with Radio 4’s Quentin Cooper about the early history of neurosurgery and its charged, complex relationship with psychiatric practice.

When asked to come up with a title for this event I had chosen ‘Brain Wars’ because it related to four distinct aspects of the imperative to treat mental illness over the past century or so. Firstly, I am always surprised at how often the struggle to understand and cure is presented in warlike terms – there comes with it a weary and stolid shrugging of the shoulders, as if to say that the treatment may offend our ethical sensibilities or standards of human propriety, but this is war, goddamn it. Secondly we might add the impetus which the First and Second World Wars put upon the search to find a cure for the dreadful psychological aftermath of combat – the concept and naming of Post Traumatic Street Disorder is, we should recall, still a frighteningly recent phenomenon. Then come the savage partisan wars that have broken out, during the second part of the twentieth century between the advocates of the various branches of psychoanalysis, drug therapy and solidly physiological approaches to the problem of mental illness. It often feels – and perhaps it should – that something which threatens the mind of one person must inevitably threaten all of us in that it challenges our sense of precisely who we are. And finally there are those attempts made by secret intelligence agencies and military strategists to use the mind itself as a biochemical weapon – now starting to be referred to as ‘neuro-terrorism’, this aggressive approach to the mastering of sanity has a long history, parts of which are covered in Welcome to Mars, but which still maintains a disturbing presence – recent stories on Operation Midnight Climax and the shameful death of Frank Olsen, plus the final admission of CIA involvement in an outbreak of mass insanity in the French village of Pont- Saint-Esprit in 1950 all indicate that neuroterrorism is far from being a recent phenomenon.

Contemplating the points of Sir William Sargant’s lobotomy instruments brought all of this into sharp focus for me – as such they inspired their own hysterical awe in the same way that the former possessions of a dead chieftain among his survivors. Sargant himself had nothing but withering contempt for the psychoanalytic approach to mental illness and even less for those who thought sanity might be found in a capsule. Thanks to the good graces of Ross MacFarlane, I was able to spend a fascinating afternoon in the Wellcome Library’s archive room going over some of Sargant’s papers. One quote from a piece written for the BMJ in 1958 leaped out at me in particular. ‘Some, especially in America,’ he wrote, ‘have been talking about a new golden era in psychiatry when it will be possible to give up insulin coma, leucotomy and ECT and have the chemical tranquilizers as humble handmaidens of universally applicable forms of dynamic psychotherapy for all types of neurotic and psychotic patient. I venture to predict that those psychiatrists who are saying this sort of thing will prove to have been more psychotherapeutically brainwashed than their patients.’

The attitude expressed in this excerpt – Olympian, fiercely dogmatic and robustly pragmatic – is really that of an old general surveying the battlefield and making the kind of tactical blunder Clausewitz would have warned against: that of seeing only how the battle ought to be going, not the actual course it was taking. It would still be a couple more years before Tim Leary took up his post at Harvard and a few more before The Politics of Ecstasy was published – but there is something about the tone in much of Sargant’s writing that almost invites the kind of irreverent perspective offered by Leary in the title of an essay for the Journal of Atomic Scientists back in 1962: ‘What To Do When the Viet Cong Drop LSD in Our Water Supply’. The following from the National Center for Biotechnology Information might be considered a more recent – and much less mischievous – update:


Bioterrorism is defined as the intentional use of biological, chemical, nuclear, or radiological agents to cause disease, death, or environmental damage. Early recognition of a bioterrorist attack is of utmost importance to minimize casualties and initiate appropriate therapy. The range of agents that could potentially be used as weapons is wide, however, only a few of these agents have all the characteristics making them ideal for that purpose. Many of the chemical and biological weapons can cause neurological symptoms and damage the nervous system in varying degrees. Therefore, preparedness among neurologists is important. The main challenge is to be cognizant of the clinical syndromes and to be able to differentiate diseases caused by bioterrorism from naturally occurring disorders. This review provides an overview of the biological and chemical warfare agents, with a focus on neurological manifestation and an approach to treatment from a perspective of neurological critical care.

Pictured from top to bottom: Quentin Cooper and KH in conversation, then bearing down on the mystery object, plus some wonderful background details of the Wellcome Library reading room where ‘The Thing Is…’ was held; KH at the Perspex display case containing William Sargant’s needles; a view of the ‘Watts-Freeman lobotomy instruments’ from the top of the case; members of the audience coming in for a closer inspection of the needles at the end of the event. This photo series comes courtesy of Daily Planet roving shutterbug Kitty Keen, to whom respectful and profound thanks are as always due - as indeed they are to all those who helped to make this event such an engaging pleasure.
Posted by Ken Hollings at 13:27