On The Golden Stairs 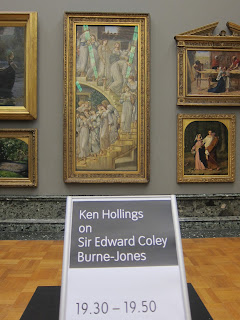 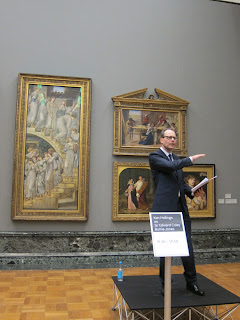 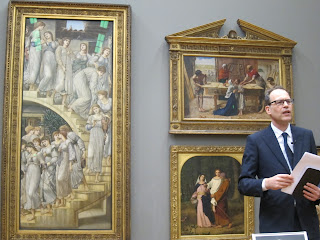 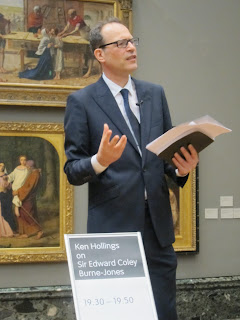 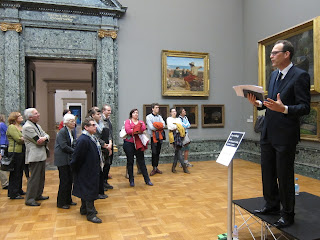 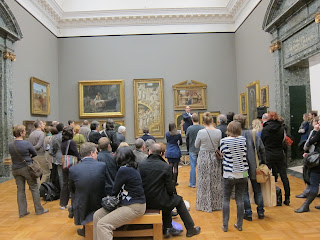 Earlier this month I gave a talk at Tate Britain as part of their evening event for December 2. I was invited to talk about any painting I liked in their historic collection and decided upon The Golden Stairs by the Pre-Raphaelite painter and illustrator, Edward Coley Burne-Jones. One of the most enigmatic canvasses hanging in Tate Britain’s main gallery, it is not a work that gives up its meaning readily – nor will any amount of analysis or discussion exhaust its possibilities. Even now I find the painting intriguing and evasive – a fin-de-siècle enigma that anticipates the structural dynamics of the flat plane as revealed in modernist art while at the same time seeking to escapee the base materialism of the modern age. A depiction of perpetual motion that gently echoes the time and motion photography of Eadweard Muybridge, The Golden Stairs is simultaneously a magical working and a conceptual artwork that seeks in my opinion to capture the wayward rhythms of thought itself. As we rediscover modernism is a variety of interdisciplinary practices that continues to this day – postmodernism being but a brief hiatus in a longer, more complex and subtler process – the undiscovered and ambiguous beauties of Burne-Jones’s art will become increasingly important. ‘Only this is true,’ the painter wrote, ‘that beauty is very beautiful, and softens and comforts and inspires, and rouses and lifts up and never fails.’

The photo series reproduced comes courtesy of Daily Planet roving shutterbug Kitty Keen, to whom respectful and profound thanks are due. The Golden Stairs is clearly visible behind KH in the top three perspectives.
Posted by Ken Hollings at 09:42