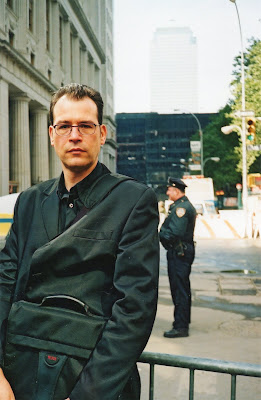 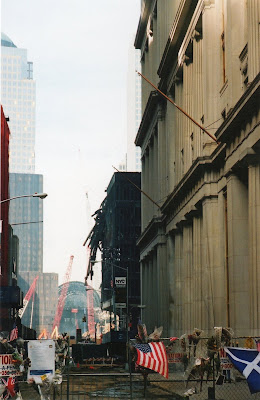 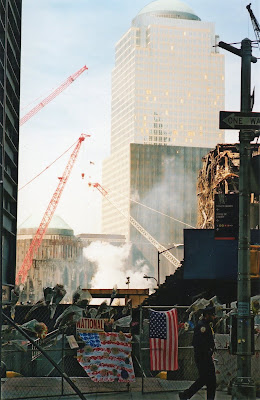 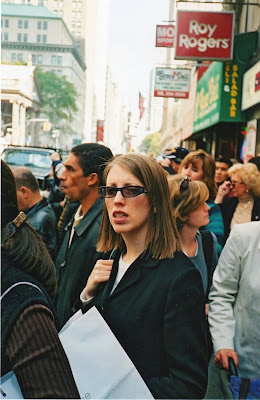 We were married at 3.30 in the afternoon on 13 October 2001, police surveillance helicopters circling overhead. We danced for part of the night and then caught our flight to New York the next morning. The departure lounge was almost empty; and they were only using plastic cutlery in all the bars, cafés and eating areas.
There were a lot of empty seats on the plane too.
Looking back, I can see that it was the blind faith we had in ourselves and in the plans we’d made during the summer that was now taking us to New York. We arrived at the UN Plaza Hotel around ten at night and asked a woman at reception if we could see the swimming pool up on the 39th floor, just so we could find it again early the next morning.
‘The pool is closed right now,’ the woman said, ‘but sure, you can go up and have a look around. Someone should still be there.’
All we could see at night as we walked through glass-walled corridors to the pool area were the lights of midtown Manhattan arranged all around us like a universe of stars. An attendant in a white T-shirt and blue overalls was swabbing down the tiles over on the far side of the swimming area, a flattened panorama of darkness and light stretching out behind him.
He looked up at us.
‘They said in reception it would be OK for us to look around.’
Trailing a long white cable through the water, a robot pool cleaner shaped like a small mechanical turtle was working its way across the bottom of the pool towards the deep end. The attendant smiled and leaned on his mop.
‘Sure, go right ahead,’ he said. ‘Heck of a view, isn’t it?’
He spread an arm to indicate the starry expanse behind him.
‘Incredible,’ we said.
The robot pool cleaner continued its journey beneath the silent blue water.
‘They’ll build ’em back up again, you know?’ the attendant suddenly said. ‘They’ll build ’em up again for sure.’
‘You mean…’
He nodded his head vigorously.
‘See that light?’ he said and pointed towards a white glow on the horizon, just beyond the office lights of midtown Manhattan. ‘They’re working there right now.’
Oh my god, my god.
‘They’ll build them again,’ he said. ‘Sure to.’
He sounded so certain of what he was saying that it was hard not to believe him. He might even have been right just then and that was what they were planning to do. But even so, all we knew was that we were married now and together, and it felt as though we were walking among the stars.

The above text is taken from ‘Everything Is Going Extremely Well’, a short story of mine that appeared in issue 6 of Succour Magazine – ‘The Future’. It is a pretty accurate account of what Rachel and I first encountered in Manhattan in October of 2001. The story actually ended there, so it doesn’t mention the anthrax scare that was taking up all the news headlines at the time or the plane that crashed near Rockaway Beach, or the dump trucks filled with sand and rubble at the end of practically every main street, or the armed state troopers, and the humvees parked up high on the sidewalks, or indeed the fire trucks that would come chasing down the avenues, lights flashing and flags flying – everyone would stop and cheer as one went by. The story also does not include – and not many accounts can do full justice to – what it was like to visit Ground Zero in the weeks following the attack on the Twin Towers. The area was cordoned off, but that didn’t stop a huge press of people from filling the side streets and open areas in the immediate vicinity. The air was dark and smelled of burning – you felt toxic just breathing it in – and everywhere there was this low murmuring of voices as if no one dared to speak too loudly. It felt like we were all crowded together in some vast open-air cathedral. Rachel and I hadn’t gone there with the intention of taking photographs, but in the end there was no other response left open to you but to do so. Confronted by so much sorry and despair and by your own sense of individual helplessness, there was at least some refuge in lifting a camera to your eye and clicking a button. The above are just a few of the pictures we took, and they pretty much capture both the feeling and the moment.
Posted by Ken Hollings at 15:53

Labels: Catching Up With, Print Media