Martians and Communists at the British Library 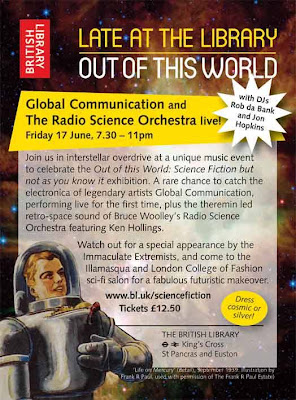 On Friday June 17 I am making a rare live appearance with my old friends the Radio Science Orchestra at an evening event organized as part of the British Library’s ‘Out of This World’ exhibition. Coordinated and led by the legendary Bruce Woolley, the RSO specializes in combining the sounds of vintage electronic instruments with more conventional items such as harp and woodwind. In the past we have presented shows together at the ICA to celebrate the 50th anniversary of the launch of Sputnik with Thomas Dolby and a collaboration at Bath’s ICIA based around themes from Welcome to Mars and the RSO’s History of the Future album release.

On Friday night we bring you ‘Return to Mars’: an exploration of cosmic easy listening, master scientists from outer space, hybrid humans, Soviet cosmonauts and alien messengers. Sharing the bill with us are Global Communications, making their first live appearance since…well ever, really, plus DJ sets from Rob Da Bank and Jon Hopkins, and the whole thing will take place in the British Library’s palatial departure lounge of an entrance hall. For more information, click here.

Meanwhile here is some extra text from the British Library press release:

The British Library celebrates Out of this World: Science Fiction but not as you know it with a unique music event featuring rare live performances by Global Communication and The Radio Science Orchestra plus exceptional DJs Rob da Bank and Jon Hopkins.


The retro-space sound of the Radio Science Orchestra featuring theremin and other futuristic instruments is the brainchild of Bruce Woolley, the phenomenally talented writer and producer of everything from Video Killed The Radio Star (The Buggles) to Slave To The Rhythm (Grace Jones) and A Huge Ever Growing Pulsating Brain That Rules from the Centre of the Ultraworld (The Orb). Tonight’s special show is entitled Return To Mars and features the visionary SF musings of writer Ken Hollings.

See you there…otherwise I’ll see you in the next world...don’t be late.
Posted by Ken Hollings at 09:37

Great stuff, will endeavour to come along!

Hi Ken, I'll be there - what time are you due to start? Cheers, Nick

Hi Nick - good to hear from you. As to your question: doors open at 7.30 and 'Return to Mars' is due to start at 8.15 - should be quite a show if recent rehearsals are anything to go by. See you there.

Sounds good - I don't want to miss "Return To Mars", so need to ensure I leave the Euston Flyer in good time. Cheers, Nick