From Gameboy to Armageddon 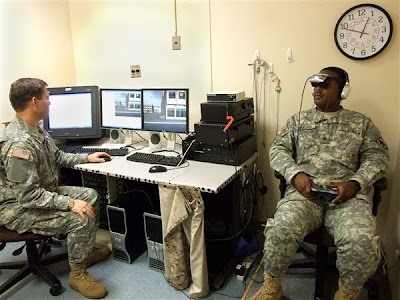 For those of you who missed it first time around or who haven’t downloaded it from speechification, BBC Radio 3 is repeating ‘From Gameboy to Armageddon’, my recent feature on the military-entertainment complex.

Looking back on the making of this programme a number of moments present themselves once again: the long and detailed conversations with Tim Lenoir about his amazing ‘Theaters of War’ paper, written with Henry Lowood, talking with the legendary Jack Thorpe on the benefits of introducing West Point cadets to the delights of science fiction  and – perhaps the most vivid of all – my girlish screams when about to be squashed by a runaway US Army Humvee in the ‘Virtual Iraq’ CAVE at Reading University. Clausewitz, I am sure, would have had something to say about that – Mark Burman, my producer certainly did.
The show goes out between 9.30 and 10.15 pm on September 7. 2010 – find out more by clicking here .