Laurie Lipton Is Coming To Get You 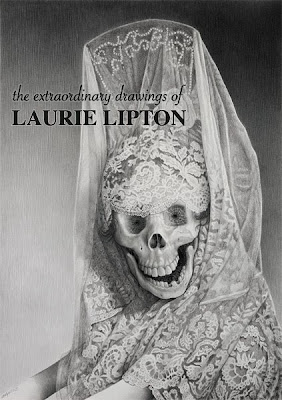 One of my favourite artists, Laurie Lipton has a rare feel for the rarefied sensory deprivation of the suburban experience: the scuttling and crawling that informs the astringent moral vision of her pictures (and I constantly maintain that it is, above all else, a moral vision) is given form and substance by the glossy banality of their setting. The two drawings reproduced at the top of this post, ‘On’ and ‘Off’ are indeed terrible to behold – in some ways reminiscent of a faked photograph going the rounds allegedly showing a gigantic RAND computer from 1957 but actually photo-shopped from a nuclear submarine’s control room on display in the Smithsonian. However, the true terror of Lipton’s vision is to be found in the delicate folds and frills of the housewives’ aprons – the spirit of ‘Momism’ has never been more accurately depicted. Now you know why no one ever checks into the Bates Motel since the early 1960s – and why Laurie Lipton is always such a welcome visitor to this blog.

More news from Weird Science High’s class valedictorian: Last Gasp in San Francisco have recently added The Extraordinary Drawings of Laurie Lipton to its mail order lists. Without any shame at all, I reproduce the cover art above and quote extensively from Last Gasp’s online entry for the title, which says it all a lot better than I can:

‘Laurie Lipton’s vast and eerily memorable drawings have been widely recognized for their sublime references to life’s predicaments. Portrayed with a teeth-clenching humour and consummate skill, her work is rich in imagination, artistry and social awareness. Laurie has been drawing since the age of four and has developed her own technique inspired by the 16th Century Flemish Masters: using thousands of tiny lines, like the brush strokes in an egg-tempera painting, to build-up tone and form. At long last a comprehensive book on Lipton’s work has been published. The subjects of her art -- fear, politics, sexuality, murder, mayhem, greed, indifference -- are timelessly classic yet relentlessly up to date. This publication is not only for art lovers, but for anyone who has ever seen the mask slip off “reality”.’

Now buy it or die.

Reproduced above: Laurie Lipton’s ‘On’ and ‘Off’, courtesy of the artist; cover art for The Extraordinary Drawings of Laurie Lipton, BeinArt Publishing
Posted by Ken Hollings at 09:22