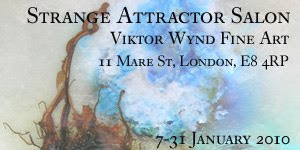 Strange Attractor is setting up its Salon for the first time since 2007, this time at Viktor Wynd Fine Art in mystic Hackney, and it looks like being the most ambitious SA event to date. As well as a permanent exhibition of graphic arcana from some of the best practitioners in the business, there will a whole series of live events to keep the public guessing. Confirmed contributing artists include:

On January 22, I’ll be sharing an evening with the crowned and conquering English Heretic. ‘Astounding Stories’ will surely find us both plunging deep into pop culture weirdness of every kind. The following description is from Mark Pilkington’s recent post announcing the SA Salon:

English Heretic creates verdant, darkly humorous soundscapes for the darkest recesses of the English imagination. The magical texts of Kenneth Grant and the occult fictions of Sax Rohmer form an uneasy alliance, accompanied by a musical backdrop that glides effortlessly from Motown to 70s progressive horror rock. Ken Hollings reads from his book Welcome to Mars: Fantasies of Science in the American Century with a live, improvised soundtrack of 1950s electronica for analogue synthesisers, reel-to-reel tapes and theremin from Simon James and Bruce Woolley

Let no face be turned away.