'The Future is Back': A Lecture on Marshall McLuhan 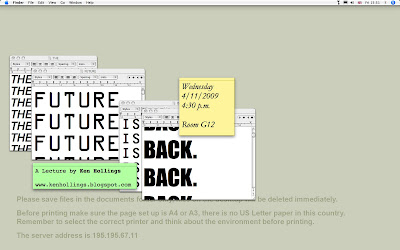 On Wednesday November 4, I will be giving a lecture on rereading Marshall McLuhan in the digital age for BAGD students at Central St Martins. Titled 'The Future is Back', the talk will be held in G12 at 16.30. I hope to see you then.

‘I have no theories whatever about anything. I make observations by way of discovering contours, lines of force and pressures. I satirize at all times, and my hyperboles are as nothing compared to the events to which they refer.’ Marshall McLuhan

The future is back…so where’s my jetpack? By the time of his death, Marshall McLuhan – the man responsible for introducing into mass consciousness such flashcard concepts as ‘the global village’ and ‘the medium is the message’ – had been largely forgotten, his writings on the media either dismissed or discredited. Rereading McLuhan in the digital regime, however, reveals many useful tools and insights for approaching today’s new media. The lecture also deals with how notions of history and progress have altered radically as we entered the 21st century. From the motorway to the humble light bulb, McLuhan’s views on how media extend our sensory responses to the world have a renewed relevance, reflected and redefined in the theoretical writings of Jean Baudrillard, Paul Virilio and Friedrich Kittler.

My thanks to Ed Cornish for the publicity material, reproduced above.
Posted by Ken Hollings at 14:55