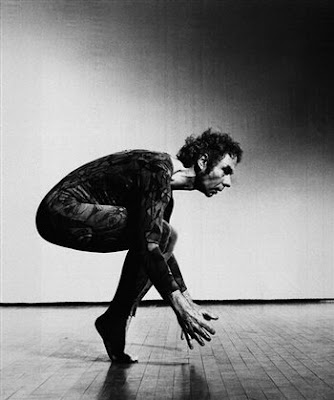 Merce Cunningham and John Cage would both speak of dance as having to ‘stand on its own two legs’, of how it must exist without ‘musical support’.
Maybe that’s because of the memories contained within each dancer’s muscles.
‘It would always astonish me,' Cunningham recalls, 'how when we put a dance away for two months or so, dancers would remember what that dance was and also how accurate their timing would be. Say it’s a 25-minute piece: they’d come out at 24 minutes and 58 seconds.’
Recently the company revived How to Pass, Kick, Fall and Run: one of the rare works in which Cunningham himself still appears onstage. Rather than dancing in the piece, however, Cunningham now reads from a selection of Cage’s original stories, usually accompanied by the company’s sprightly archivist, David Vaughan.
‘There are now two readers,’ he says. ‘Each reads twelve stories and can choose when there should be silence. John said it’s more like music when two people read the stories together because you can’t discern the words.’
And was Cage a good dancer?
Cunningham smiles and shakes his head.
‘Oh no,’ he says fondly, ‘No.’

The above is adapted from my piece WHERE ARE WE GOING? AND WHAT ARE WE LISTENING TO?: Merce Cunningham in Conversation, NYC July 2006, originally published in The Wire, issue 271. I had the pleasure of working with John Cage and Merce Cunningham on separate occasions - and the privilege of learning a great deal from both of them.
Posted by Ken Hollings at 14:09