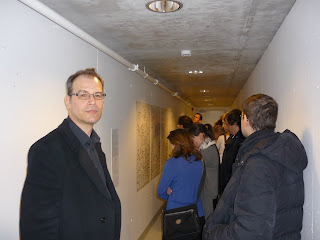 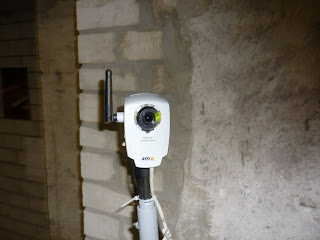 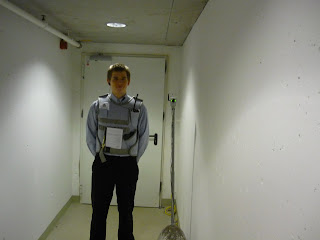 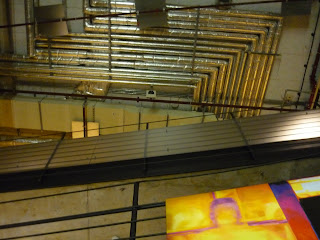 Below ground, the Embedded Art show emphasizes even more forcefully the concept of security as theatre. I was accompanied by animator and filmmaker Lillevan on one of the last guided tours of the exhibition – this is the only way to see some of the more restricted items in the show, including Requiem for the Network, the four-panel installation I created in collaboration with designer Rathna Ramanathan. Uniformed security guards (or at least their very obliging representatives) keep parties of visitors moving through doors that only open with the swipe of key card, forbid the taking of photographs and generally make their presence felt. As participating artists, Lillevan and I were allowed to break away from the main group and do some of our own documentation. ‘You’ve probably just blinded somebody upstairs,’ Lillevan observed in his usual charmingly discreet manner as I took a flash photograph of one of the CCTV cameras. I’d forgotten that these images feed straight back up to the War Room Lillevan and Zaji Chalem had designed for the ground floor.

The exhibition space itself also formed a key element of the show: the basement rooms – useful only for storing non-valuable items of academy bric-a-brac – had been left pretty much untouched: the floor was raw concrete, the while walls stippled with paint flakes and staples, and the view up through the central gallery revealed heating ducts, wiring and insulation. The overall feel is of a connecting suite of test beds or interrogation cells. ‘Requiem for the Network’ had an entire corridor to itself, the installation and the space working very dramatically together in the name of security as a bureaucratic precaution: something bland and maintained far from public view. More documentation on the work's installation in a following post.

Pictures two and three show the CCTV cameras and an Embedded Art security guard in situ. On either side of them in the sequence: KH and the rest of the tour stop at ‘Requiem for the Network’ (photo taken by Lillevan), and the view in the main underground chamber of the show looking straight up.
Posted by Ken Hollings at 09:29