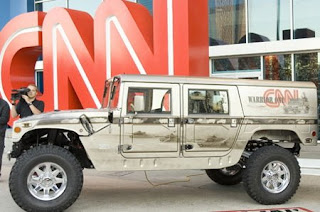 CNN, the best thing to happen to European hotel rooms since the invention of balconies, recently ran a feature on the Embedded Art show at the Akadamie der Kuenste in Berlin, where ‘Requiem for the Network’ is currently on display. You can see the cable news station’s brief tour of the exhibition, complete with armed guards and CCTV cameras, by clicking here.

What makes the report true poetry, however, is the next news item up: two young US army officers in combat fatigues handing over the keys of the city to the mayor of Baghdad. After Embedded Art you can really begin to see security as a form of theatre.

The exhibition continues until 22 March 2009. For all the posts on ‘Requiem for the Network’ and the Embedded Art show in general, click here.

The above image: another Itasha (see previous post) in the form of the CNN Baghdad battle cruiser – NB: CNN’s advertising rates tripled during the course of the first Iraq war.
Posted by Ken Hollings at 07:27