Requiem for the Network: Second Stage 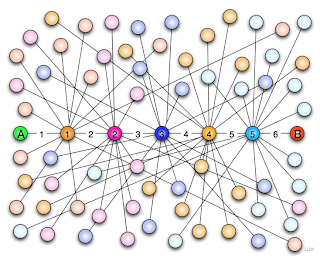 From October through to the end of November I worked on a text which would eventually form the basis for the series of posters Rathna would design for installation in the basement of the Akademie der Künste in Berlin as part of the Embedded Art show. As the main title for the piece was a parody of the title for an essay Jean Baudrillard wrote in the early 1970s – ‘Requiem for the Media’ which I first read in ‘For a Critique of the Political Economy of the Sign’ – I decided to add the subtitle ‘Six Degrees of Devastation’, which parodies the main formula of Stanley Milgram’s ‘Human Web’ experiments.

I had previously used a parody of Baudrillard’s title for one of my lectures at CSM, but in a slightly different form, referring to ‘networks’ in the plural rather than the singular. At the time I was more concerned with the way in which mainstream media networks appeared to be feeding into one another – a process that had begun during Operation Desert Storm and best reflected in the 300% rise in advertising rates imposed by CNN during their coverage of what has now become known as ‘Iraq 1’. Nearly two decades later, advertisers are pulling money out of mainstream TV as their main target audience – made up of males aged between 18 to 35 – drifts away into other parts of the network. It is also from this group that the majority of soldiers currently serving in Iraq and Afghanistan have traditionally been drawn. In 2004, the year of the previous election, two forms of human counting were still conducted on paper rather than digitally over the web: Nielsen ratings and the votes cast by US military personnel serving overseas.

Today, however, increased interest in network theory and network practices has led me to believe that ‘the Network’ should now be referred to as a singular abstract entity in the same way that ‘the Media’ have always been worshipped as an abstract plurality: an electronic pantheon of Hindu deities serving one godhead through their many limbs and attributes. Today we have but the one true Network before us and must respond accordingly.
Posted by Ken Hollings at 10:53