Catching Up With the Bourbaki Panorama 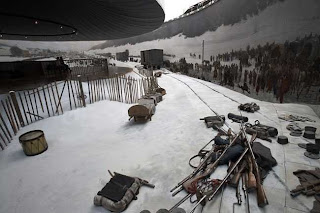 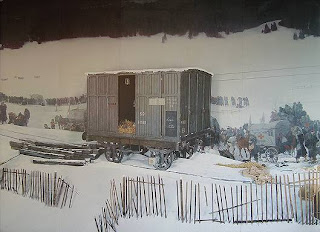 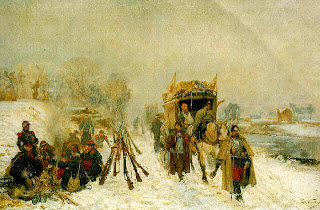 A recent posting on Boing Boing by my friend David Pescowitz has served to remind me of my visit last month to the Bourbaki Panorama: a late-nineteenth century panoramic ‘entertainment’ housed in a custom-built roundhouse right by Lake Lucerne in Switzerland. It was created in about 1880 to commemorate the retreat of the demoralized French army after their defeat by the Germans in 1870/71. It’s predominantly the work of Swiss painter Edouard Castres and called the Bourbaki Panorama after the French army’s general who made an unsuccessful attempt to commit suicide after the defeat (talk about leadership skills...).

A large number of modellers and painters, including leading modernist Bernard Hodler, worked on the 360-degree diorama, which is a spectacular blend of life-size wax mannequins and a continuous painted backdrop - the whiteness of the snow helps cover the transition from 3D to 2D, but it’s the use of telegraph wires, train tracks, stretchers and cattle cars to suggest shifts in distance and dimension that is particularly skilful. Unfortunately they’re really strict about taking photographs of the panorama – these are only a handful I found on the web, together with one of Castres’s canvasses to remind us that it’s a painterly space we’re discussing here. Meanwhile the Bourbaki Panorama remains something you’ve got to go visit in person. Just like a 3D IMAX screening.

I wrote to David about visiting the panorama before Christmas, thinking he’d find it interesting, and reminded him of it again recently, as I hadn’t heard from him in a while. His use of an extract from my original email in the resultant post has served as an important lesson in how informality remains an important element in the useful pursuit of online communication: there is, as I am constantly finding, a moment when the urge to revise becomes an excuse for hesitation – and who knows where that will lead. The other big reason why I recommend visiting the post is to follow the incredible exchange of comments that has ensued: it practically constitutes an index of immersive environments in itself.
Posted by Ken Hollings at 15:47

Labels: Catching Up With, Journal, The Bright Labyrinth