Lecture Four: Morphology of the Wound 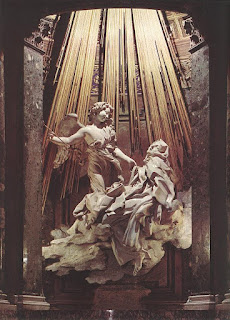 ‘Lucidity excludes desire (or kills it, I don’t know); it dominates what remains’
Georges Bataille, L’Impossible

The fourth lecture in the Bright Labyrinth series deals with themes of ecstasy and excess and the impossibility of communicating such experiences in any rational or lucid form, least of all in an age of digital media. It will approach this problem historically by making connections between the writings of Georges Bataille, the Marquis de Sade, Saint Theresa of Avila and the St John of the Cross, seeing in their attempts to illuminate such extreme experiences as agony and ecstasy a struggle to maintain individual consciousness at the precise moment when identity itself is at its most vulnerable and threatened. The result is often delirium and paradox, within which we find a far darker truth residing: one that animates the Dionysian rituals of Vienna Actionist Herman Nitsch and the adolescent sadomasochistic fantasies of Kenneth Anger’s first film ‘Fireworks’.

Can such images of madness and violent excess survive into the digital regime, where identity seems to be of the highest importance, or will their meaning inevitably be changed? And, if this is so, are we in danger of leaving our bodies – hardened and hollowed out by liposuction, keyhole surgery and implants – far behind us? Or will the work of Franko B and Orlan take us into the future by connecting this new flesh with some very old rites?

For more information on the Vienna Actionists and archive footage of their often extreme performances, click here.

To get a preview of Kenneth Anger’s ‘Fireworks’ click here.

To remind yourself of how 'Un Chien Andalou' by Salvador Dali and Luis Bunuel begins, click here.

Please be advised that the content of this lecture will not in any way be pretty. Top image: 'The Ecstasy of St Teresa' by Bernini.