Welcome To Mars Is Here. It Moves Among You. 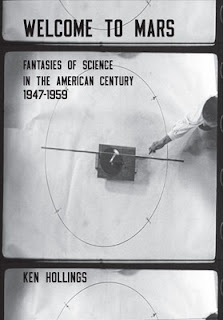 ‘No one would have believed in the middle years of the twentieth century that human affairs were being watched closely by intellects vast and cool and remote, slowly and surely drawing up their plans for us...’

The years of waiting and speculation are over. We can finally reveal to the entire world that there is indeed life on Mars. It lives. It breathes and it’s watching you right now.

The books are printed and in the warehouse - the ‘buy’ button on the Strange Attractor website has now been activated. The first 200 orders filled come packaged with a limited-edition CD of electronic music from the original radio series. Here are the publicatuion details plus an extract from the press release:

‘Welcome to Mars is a map of the post-war Zone, a non-fiction Gravity’s Rainbow that follows the arc of Germany’s V2 rocket to the end of the rainbow - to America.’ Erik Davis, author of ‘Techgnosis’

‘Welcome To Mars’ draws upon newspaper accounts, advertising campaigns, declassified government archives, old movies and newsreels from this unique period when the future first took on a tangible presence. Ken Hollings depicts an unsettled time in which the layout of Suburbia reflected atomic bombing strategies, bankers and movie stars experimented with hallucinogens, brainwashing was just another form of interior decoration and strange lights in the sky were taken very seriously indeed.

‘Ken Hollings shows brilliantly how the extraordinary web of technologies that drove the Cold War have shaped not just our culture but the very way we think of ourselves as human beings. Welcome to Mars offers a rare and fascinating glimpse of the roots of the strange humanoid culture we live in today.’ Adam Curtis, director of ‘The Power of Nightmares’ and ‘The Trap’

‘Ken Hollings has placed his critical focus at the precise point where the high technologies of information control and social manipulation intersect the passionate search for scientific ways to probe the human mind. Welcome to Mars is a searingly accurate and deeply disturbing exposé of the fantasies of American modernism that have inspired the many nightmares and the few hopeful visions of our new Millennium.’ Dr Jacques Vallée, author of ‘Network Revolution’ and ‘Passport to Magonia’

As well as the CD of music by Simon James, a small run of postcards have also been produced using images from the book and these are being sent out with any orders from Strange Attractor Press.
Posted by Ken Hollings at 10:17