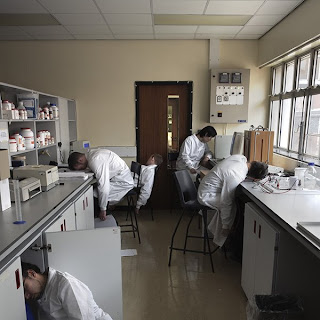 On September 30 there will be a screening of ‘SpaceBaby’ at the Scottish Exhibition and Conference Centre in Glasgow as part of an evening curated by Arts Catalyst for this year’s ‘Less Remote’ conference on space and space exploration.

‘SpaceBaby’, which had its first public viewing at the Whitechapel Gallery in London on June 6 this summer, is a film I’ve been working on with Jo Joelson and Bruce Gilchrist of London Fieldworks over the past year or so. They asked me to develop a script with them that would feature documentation of their SpaceBaby performance/installation at the Round House as part of Arts Catalysts’ ‘Space Soon’ Conference in September 2008.

Bruce and Jo entered into a suspended form of social hibernation during the course of the four-day event, working at night and sleeping during the day in specially designed capsules. Blood samples were taken regularly to produce a genetic map of how their bodies responded to the inversion of their normal circadian cycles.

In the finished script we examined how time and the rhythms of the body influence consciousness and our sense of identity. Footage from earlier experiments conducted by Jo and Bruce at St Thomas’s Hospital was also included, along with some weird scenes shot in a Yotel, some disgusting sequences featuring rats (on loan from the London Dungeon) scrabbling around in a maze, plus some neatly choreographed laboratory procedures captured in the genetic research labs at Leicester Hospital as they processed the Roundhouse blood samples.

For details on the ‘SpaceBaby’ project, visit the London Fieldworks website at:
http://www.londonfieldworks.com/projects/spacebaby/index.php

For more information on, and to book tickets for, this year’s Less Remote, please visit: http://www.lessremote.org/curated.htm