Catching Up With the Hyatt Regency Atrium 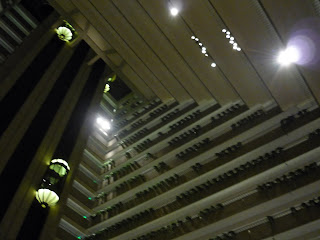 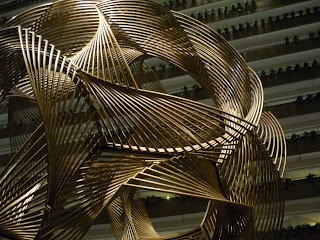 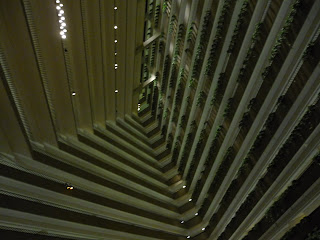 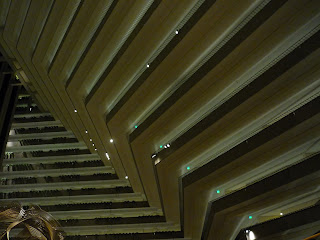 Anyone interested in time travel should take the opportunity, if they can, to linger awhile in the lobby of the Hyatt Regency in San Francisco. Just two short escalator rides up from Drumm Street, opposite the Embarcadero BART stop, it is widely held to be the largest atrium in existence. Designed by architect and property developer John C Portman, it was built in the early 1970s, at a time when NASA’s Apollo space programme was winding down while greater emphasis was being placed upon the creation and maintenance of orbiting space stations. What you find yourself straining your neck to fully appreciate is a space ark fashioned out of raw concrete.

The Hyatt Regency is the perfect embodiment of a space that has been ‘hollowed out’: everything clings to the inside edge of its vast interior. Instead of having to negotiate mazes of corridors superimposed on each other from floor to floor, all rooms are accessed by a series of tiered balconies that run around the space’s inner perimeter. Instead of a central enclosed core of elevators and stairways, its points of access have moved out to the very periphery of the building, placing it as far as possible to the outer corner of the atrium.

From the outside it looks like nothing at all: just a series of introspected concrete grids, slits and ledges, its overall shape defined by the gap left between existing structures. In this respect it looks forward, not to the worlds of Logan's Run and Battlestar Galactica, but to the urban fortresses Frank Gehry created in Los Angeles during the early 1980s, such as the Goldwyn Library.

At the same time, the Hyatt Regency’s design looks back to the work of architect Morris Lapidus, responsible during the 1950s for a fantastic line in resort hotels, such as the Fontainebleau in Miami Beach. ‘You want to have fun,’ Lapidus said of his creations. ‘Don’t try. You are in my hotel. You’re having fun.’ Lapidus piled excess upon excess. To visit one of his hotels was to find yourself inside a movie: each experience was shaped and structured as a series of cinematic illusions. The lobby of the Fontainebleau, for example, was famous for its spectacular grand staircase that led nowhere. The building practically had the experience for you. Not surprisingly, John Portman started his design firm at the same time as Lapidus was creating movie sets in which his customers could act out lives that were removed from their lives. We can trace a similar line of thinking to a statement made by John Portman in 1976.

‘Architects in the past have tended to concentrate their attention on the building as a static object,’ he wrote in The Architect as Developer. ‘I believe dynamics are more important: the dynamics of people, their interaction with spaces and environmental condition. We must learn to understand humanity better so that we can create an environment that is more beneficial to people, more rewarding, more pleasant to experience… Buildings should serve people, not the other way around.’

Two executives in white shirts, bound for one of the Hyatt Regency conference rooms, brushed past me while I was taking these photographs. ‘It was fantastic,’ one said to the other excitedly. ‘He presented all our issues in one thirty-second deliv.’ But that’s another story.
Posted by Ken Hollings at 12:40