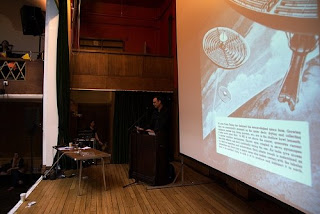 Due to the grave paper shortage affecting the Chinese printing industry - and with similar reports now coming from in India as well - publication of my forthcoming book Welcome to Mars is being put back to Autumn 2008. In the meantime Strange Attractor Press has been using the extra time to sort out details on the Welcome to Mars soundtrack CD, featuring some of the electronic score created by Simon James for the 12-part Resonance FM series upon which the book is based. Simon not only produced the original live shows but also acted as sound designer, bringing a particularly dark alien charm to each show. Those interested, should definitely check out his website http://www.simonsound.co.uk/ - which includes a link to the i-Tunes site where all 12 programmes are available as a free download.

The soundtrack CD will only be available with the first 200 copies of Welcome to Mars to be purchased directly from the Strange Attractor website and will feature the following tracks:
1. Welcome to Mars radio series intro 2. 'Absolute Elsewhere' 3. 'Falling Meteor' 4. 'Battle for the Mind' 5. 'Song of the Siren' Part One 6. 'Song of the Siren' Part Two 7. 'Modular Edit I' 8. 'Contact with Space' 9. 'Bells and Scrapes' 10. 'Oscillator Interlude' 11. 'Voyage to the Moon' 12. 'Greetings, My Friends' 13. 'Modular Edit II' 14. 'Flying Saucers over America' 15. 'Meet the Monsters' 16. 'Bell Tolls' 17. 'Other Tongues, Other Flesh' 18. Welcome to Mars radio series out 19. Welcome to Mars live at Interesting 2008 20. Project Thrust sound logo

Track 19 is an extra added bonus - recorded at the Conway Hall in London on June 21 as part of 'Interesting 2008' it features Ken Hollings on voice and text, Simon James on electronics and prepared tape loops and Curtis James operating the tape machine. To get a sneak preview of the performance, visit either Noisy Matchbox www.mynoisymatchbox.co.uk/blog or go straight to the Strange Attractor at http://www.strangeattractor.co.uk/ - both are well worth checking out.
The photograph at the top of this post was taken during the reading and gives a pretty accurate impression of what the stage looked like from where Simon and Curtis were operating their equipment - the heavy wood lectern I am using had to dragged out from a back room hidden behind the screen. It gave the entire reading a suitably religious feel. From Graceland to the Conway Hall - my thanks to whoever took the picture.

Good to see you blogging.

Thank you for your thanks to the photographer - I guess you were to busy to notice me in between changing tape loops, taking a quick snap of you. Wish I'd taken more.

The laws of perspective should have made me realize it was you who took the photograph - hardly looked up from my lectern the entire time - some of the pics on Flickr of you and Simon at the controls are pretty great though...