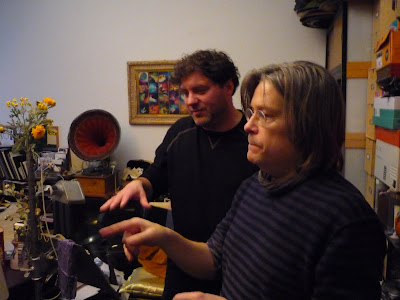 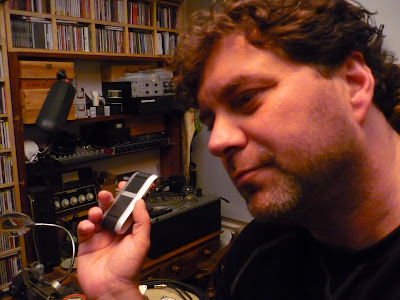 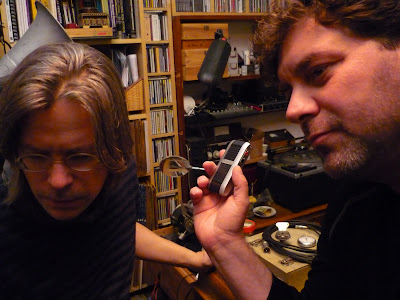 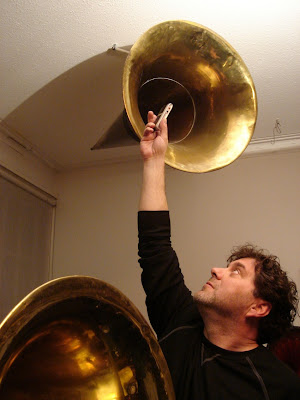 The story so far: EVP researcher and recording artist Michael Esposito and I are on a visit to the studio of composer Aleksander Kolkowski , which is packed with the most remarkable collection of antique sound production equipment. Now that I have recorded a text onto one of Aleksander’s vintage Edison phonographs, the room is now ready for Michael to conduct an EVP session.

Michael had brought a small MP3 recorder with him, and there followed a deep discussion between him and Aleksander over what software platforms to use in order to process the EVP files he was about to make. As I still regard ProTools with a respect verging on religious awe, having witnessed it clean up and shape too many recorded interviews in the past to think of it in any other way, I refrained from taking part in this part of the proceedings. After a break for tea and a chance for Michael to smoke a quick cigarette out on the balcony above the studio, we went back inside to find the mood in the room had changed appreciably. Michael had used the MP3 recorder only a couple of days before at the home of Mike Harding, cofounder of the ParaPsychic Acoustic Research Cooperative (PARC), as part of an EVP session, and the device had started running wild: the signal kept switching back and forth across the left and right channels during the recording. Michael played it back to us, and the air seemed to vibrate and pulse around the little handheld machine. This was going to be interesting, I thought. For the first part of the session Michael asked Aleksander to switch on two of his Edison phonograms, one set to record and the other to play back, and leave the cylinders spinning for the duration, not playing or recording anything but just set in motion. The result was an eerie seething sound, made all the more churning and oppressive by the fact that the three of us conducted the entire session standing in silence. Edison never intended these machines to record silence – the last words and final breath of the dying perhaps, but never silence. The phonographs’ smooth grinding continued as Michael would ask an occasional question of the room. ‘Who are you?’ Pause. ‘Is there anything you want?’ Pause. ‘Is there anything you recognize?’ He shifted the recorder around from machine to machine – ‘Use the spirit horns if you have something to say,’ he politely suggested, indicating some of the equipment assembled about us.

I remain completely open-minded on the subject of EVP; although an aunt, of whom I was very fond, had been a practising clairaudient for much of her life. Even so, looking around Aleksander’s studio, I really wanted these machines to offer up their voices. We played the five-minute recording back, Michael listening intently, picking out phrases, boosting the signal and playing them that. He made a note of the statement ‘I’m Jacob’ and suggested we focus on that for the second part of the session. I could not always make out the phrases and statements Michael stopped at and replayed and was prepared to say so – the experience was enough, however, to see that the best recording artists are the ones who, however instinctively, treat their equipment as if it were a living organism rather than a mere assemblage of parts. ‘Wow. Did you hear that?’ Michael suddenly asked, bringing us back to the present. No – play it again. ‘That time?’ No sorry – again. And then, on the third replay I heard it – a dry phantom voice emerging from the background hiss of the room, stating very slowly and deliberately: ‘I want…the machine…to work.’

After that we really needed to take another short break, just to get out of the room and clear our heads and breathe some air that was a little less charged. ‘If you ran sessions in this place on a regular basis, ‘Michael pointed out as we sat together in the kitchen ‘this whole space would get much hotter. You’d get more and better messages the more often you recorded here.’ It’s clear that this has become a regular discipline for him – a kind of training of the sensibilities that connects him to spaces and machines in a very subtle way, sometimes even taking over his personality. He spoke a little about getting ‘jumped’ when a session can suddenly take you over, altering your behaviour and even your appearance. He said it had happened one or two times over the past eight years or so. The experience did not sound pleasant.

Back in Aleksander’s studio, the second session took place in silence with all the devices switched off. Aleks and I tried taking a few photographs of Michael in action, working with the room, placing the machine inside the phonograph horns suspended from the ceiling, but we soon stopped. The stillness of a room in which three relative strangers are standing together in silence is already a very moving thing. It seems to grow around you. Michael asked some questions of Jacob – to see what kind of response he might get. The apparently one-sided exchange with the room in which answers only emerge afterwards – in ‘machine time’, as it were – was solemn and disturbing all at the same time. ‘Did you die in this room?’ Michael asked at one point, making me feel happy for the first time that it wasn’t my room he was recording in. But then we rarely know about the rooms that strangers have died in – any building in existence can have witnessed the deaths of many people before you ever come to it.

This was a shorter and far more intense session – I was amazed however when I checked my watch to discover that several hours had already passed. By then Michael and Aleksander were already hunched over a Mac, running the two recordings through different software to clean up and clarify the recordings. Voices were slowly emerging from the amplified hiss and background hum of the room. ‘They hide in the cracks,’ Michael commented as Aleksander highlighted and amplified a wave form, stretching it out. ‘They hide right down inside the sound itself.’ That humans and machines interact with each other to produce some form of alien – or other – consciousness remains an intriguing proposition. To me, it opens up the possibility that a new kind of audiovisual poetry might emerge – or at the very least be better understood. I watched and listened at a respectful distance as Aleks and Michael worked together – the results were fascinating, but it was soon time for me to go. I said my goodbyes during one of Michael’s cigarette breaks. By then it was nightfall and growing quite cold. Aleksander and I joined Michael out of the balcony one last time, watching the landing lights of passenger planes cut through the dark clouds on their way to Heathrow.


Michael and Aleksander are currently still at work on the recordings – Aleks having in the meantime run then through his Edison phonographs. The process is still continuing, so look out for further posts on the session in due course.

Pictured above: Michael Esposito and Aleksander Kolkowski prepare the room for the EVP session; Michael playing back the first recording; Michael and Aleksander listening in; Michael with one of the phonograph horns during the second recording (photo by Aleksander). For more pictures of Aleksander’s wonderful studio on the Found 0bjects blog, please click here.
Posted by Ken Hollings at 14:29

Did you know that you can create short links with OUO and get cash for every visit to your shortened links.