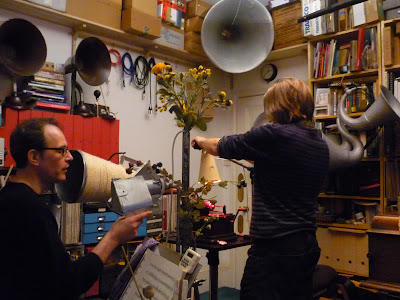 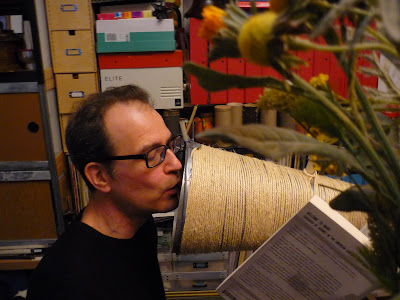 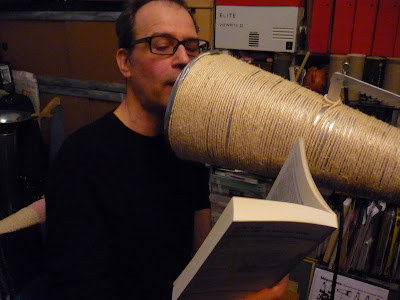 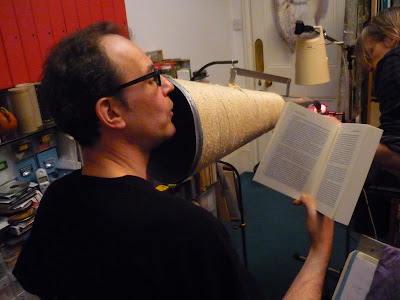 I recently had the pleasure of spending an intriguing afternoon with EVP researcher and recording artist Michael Esposito at the amazing studio of the composer Aleksander Kolkowski. Regular readers of this blog may recall that Michael was responsible with Carl Michael von Hausswolff for issuing The Ghosts of Effingham: a set of EVP recordings inscribed onto an Edison wax cylinder which also glowed in the dark. An enthused researcher of the machine's ability to reproduce sound, Aleksander’s creations include Mechanical Landscape with Bird – an extraordinary work for canaries, ‘serinette’, cylinder players and string quartet playing Stroh violins, Stroh viola and Stroh ‘Japanese Fiddle’. His work has also been featured in The Wire.

On a visit to London from his home in Chicago, Michael had already made an arrangement with Aleks to run an EVP recording session at the studio, which is an Aladdin’s cave of working cylinder players, amplifying horns for gramophones and radios, antique musical instruments, sheet music, pictures and shelves full of books and old recordings. You can get some idea of the fabulous clutter in the photographs above – although I will be posting some more detailed glimpses of the studio contents on the Found 0bjects blog in the next day or so.

The reason for my presence was a standing invitation from Aleks to make a wax cylinder of a reading from Welcome to Mars as part of his continuing archive of such recordings. This seemed like the perfect opportunity, especially since Michael and I had been in contact at the end of last year while I was writing my piece of Edison and ghosts for the January 2011 issue of The Wire. Michael was particularly intrigued by  the presence of so many gramophone horns in the room, especially some of the larger, more elaborate ones hanging from the ceiling. ‘They remind me of the spirit horns that mediums would use at séances in the early part of the twentieth century,’ he observed. Once we had regained some of our composure after first entering this modernist wunderkammer, Michael and I tried to work out with Aleks what was the best way to proceed. I offered to step aside so they could get on with making EVP recordings. ‘Actually it would be better if you went first,’ Michael replied. ‘Your reading will warm the room up a bit and make it more responsive.’

But first the Edison machine itself had to be warmed up: I practised my short reading while Aleks switched on a lamp over the cylinder, set it spinning and waited for the wax to soften before a recording could take place. It had never occurred to me that the voice was inscribed into a soft substance – I always had an idea of it being carved out of something brittle and hard. My second misconception was over how to approach a horn rather than a microphone. Working with mikes, you want to keep your face back from it in order to avoid popping and paper rustling – and after two days of recording my recent Essay series for Radio 3, I was more aware of that than ever. Instead Aleks was constantly instructing to get my face as far into the horn as possible while still being able to read from the copy of Welcome to Mars I had brought with me – images of Jean Cocteau leaning forward reciting poetry into the elaborate horn megaphone in production stills for Les Mariés de la tour Eiffel filled my head as I struggled to keep the page in focus out of the corner of my right eye and read out loud at the same time.

Aleksander had also stipulated that I would have to speak very slowly and very clearly and enunciate every last syllable. The device, it turns out, really does have formality built into it: you find yourself addressing it, rather than some unseen audience. We recorded a two-minute cylinder, waited for it to cool down and then played it back on a separate machine mounted with a massive horn. I have never heard my voice sounding like that before – normally I cannot bear to hear it, but the grain that a cylinder recording brings introduces to your words makes them sound completely different – ‘other’. It does not copy, simulate or even echo you; it is a separate entity – something that comes from the machine and only from the machine. The clicks and pops formed an unexpected accompaniment to my delivery – I was enthralled by the whole thing.

Michael had been taking photographs all the way through my reading and added the occasional encouraging smile and thumbs-up sign as it unfolded. Aleksander was also pleased with the way the reading came out – and at some point it’s going to form part of an online archive of recordings featuring many different composers, writers and musicians. There will, of course, be more on this project posted here as and when information becomes available. Right now, however, it was time for Michael to prepare the room for his extraordinary EVP session. What happened next, however, really deserves a post of its own – and I shall be only too happy to supply you with it … soon.

Pictured above: KH recording an extract from ‘1947: Rebuilding Lemuria’, the first chapter of Welcome to Mars, pp 4-5, with Aleksander Kolkowski busy at the Edison phonograph: all photos taken by Michael Esposito.
Posted by Ken Hollings at 10:54

Did you know you can shorten your urls with AdFly and receive money for every click on your short urls.